Kurtley Beale is loving life in the Wallaby No10 shirt but he's still keen to see Quade Cooper back in the fold. [more] 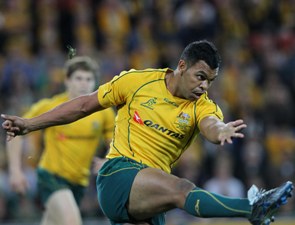 Kurtley Beale is loving life in the Wallaby No10 shirt but he’s still keen to see Quade Cooper back in the fold.

Beale took over at fly-half from his close friend following Cooper’s knee injury last month and has since impressed against South Africa and Argentina.

The 23-year-old picked up plenty of praise for his first two Test performances at pivot having been criticized at the start of the Rugby Championship.

Wallaby boss Robbie Deans dropped his team’s 2011 Player of the Year twice in the early stages of the tournament and publicly questioned his form and fitness but Beale has bounced back in style ahead of Saturday’s third Bledisloe Cup encounter with New Zealand.

"I'm feeling pretty confident," said Beale, who, after starting at 10 instead of Berrick Barnes, was one of his country’s only bright lights in defeat to the Springboks a fortnight ago.

"I'm enjoying myself in the 10 position at the moment and it's exciting playing with the guys around me – they're making my job a lot easier.

Cooper meanwhile is unavailable for the Brisbane fixture with the Kiwis and is unlikely to feature on the end-of-year tour of Europe following an initial delay in surgery to clear up a small chip of articular cartilage.

And as well as his injury worries hampering his hopes of re-establishing himself as one of the game’s most talented players, the future of the Reds playmaker is currently under a cloud after a series of outbursts in which he described the atmosphere in the Wallaby camp as ‘toxic’ and slammed a perceived conservative approach favoured by head coach Robbie Deans.

But despite being the man to benefit from Cooper’s misfortune and misdemeanours, Beale is keen to see him wear the green and gold against the Lions next summer.

"He's a class player so once he gets his body right (I hope he returns)," added Beale.

"He took the Reds to the (2011 Super Rugby title) and that year he was world class.

"So if we can have him in the squad – and with his knowledge as well, he's very smart, he knows how to play the game well – it will definitely help us moving forward."

As for Saturday’s challenge of bring to an end the All Blacks’ 16-match unbeaten run, Beale knows the Wallabies will have to be at their best in every department.

But rather than shy away from the substantial task in front of them, the Melbourne Rebel is confident it will help them bring out their A game before they head off to face France, England, Italy and Wales.

"If we are going to give these guys a good crack we've got to execute really well. That's what let us down in the first two encounters.

"Obviously they're in awesome form at the moment and they're looking unbeatable all the time.

"They're probably looking the best ever since I've been playing. They're playing some very exciting football and all their players are close to the best in their position in the world.

"That's exciting for us. It's a great opportunity for us to show we can match it with them."