Wallabies have nothing to lose

Wallaby veteran Adam Ashley-Cooper insists his side have nothing to lose when they face the All Blacks on Saturday. [more] 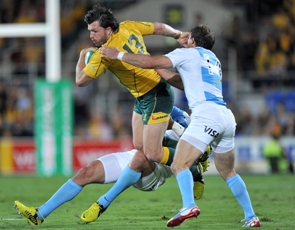 Wallaby veteran Adam Ashley-Cooper insists his side have nothing to lose when they face the All Blacks on Saturday.

New Zealand are currently chasing a 17th straight Test victory and hold something of a hoodoo over Robbie Dean’s Australian outfit.

The Wallabies have endured a horrific run of injuries in recent months and will be without the likes of James Horwill, David Pocock, Will Genia and Quade Cooper for the third Bledisloe Cup clash of the year, but a number of fringe players did impress in last week’s win over Argentina.

And with critics writing of their chances of a shock win in Brisbane, Ashley-Cooper reckons a lack of expectation could allow the Wallabies to head off on their European tour on a major high.

“These guys are the best in the world, you can't argue with that,” said Ashley-Cooper, who missed the win over the Pumas with injury but is likely to be back involved at the Suncorp Stadium.

“And I'd argue that these guys are the best All Blacks side I've ever come across. They are absolutely humming at the moment.

“We can't really let that be a distraction to us, though.

“We have to look back at what we did well on the last week of the tour and use that. We need to bring that belief out and use it.

“It's a real positive for us, knowing that guys who haven't played can step into that environment and play well and get a result when our backs are to the wall. That's a great foundation for the team.

“There's nothing to lose and we can go out and have a good crack.”

The All Blacks will arrive in Oz in great form as they look to equal a top-level mark set by their own countrymen in 1965-69 and Nick Mallett’s stellar Springboks side of 1997-98.

It would leave them just one game short of the Test high of 18 back-to-back victories set by minnows Lithuania in 2008-10 but star centre Conrad Smith admits the record could act as an extra spur for the Australians as well as the All Blacks.

“It can motivate the opposition as much as ourselves,” said Smith, whose team were ironically last beaten by the Wallabies in Brisbane 20 months ago.

“We're aware of it and not trying to hide away from it, but we know it doesn't give you any points on the board.

“So we acknowledge it and get back to the reason why we've got a string of wins like that. It's because we work really hard and follow the processes for the week, and we're going to do that again.”