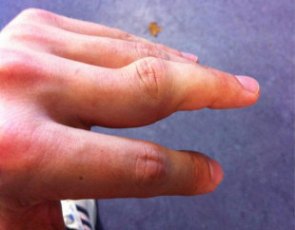 Wales captain Sam Warburton is playing down the nasty looking injury he suffered at Sale yesterday.

Warburton was forced out of Cardiff Blue’s 34-33 Heineken Cup defeat at the Salford City Stadium after dislocating his finger with just six minutes gone.

The influential openside, who is one of the favourites to skipper the Lions next summer, was taken to hospital to have his finger put back in place and to undergo x-rays to assess the damage.

But rather than complain about his pain or misfortune, Warburton tweeted two pics of his injury – both of which were unsuitable for the squeamish!

The images showed the 24-year-old’s misshapen finger before and during the x-ray, with Warburton tweeting, “Finger is finally sorted, won't be signing autographs for a while!” as he left hospital.

“Suddenly dawned on me I may have fingers like Martyn Williams by the time I finish playing!”

And while the injury looks particularly uncomfortable, both Warburton and his club coach Phil Davies are confident will be back in action in a hurry.

“Hopefully he will be back available for next weekend's game against Toulon,” added Davies.