Rob Kearney has given Ireland a major boost by returning to full fitness earlier than at first feared. [more] 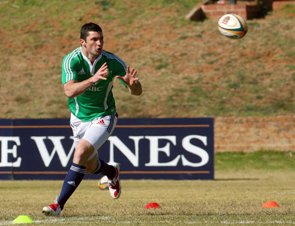 Rob Kearney has given Ireland a major boost by returning to full fitness earlier than at first feared.

The 2009 Test Lion was struggling with a back injury and was a doubt for the start of the autumn internationals.

Kearney suffered the setback in Leinster’s PRO12 defeat at Connacht on September 28 and faced anything up to six weeks on the sidelines.

That length of absence would have ruled him out of his country’s clash with South Africa on November 10, although the Leinster hierarchy were always hopeful that he would be fit again sooner than that.

Leinster head coach Joe Schmidt said at the time that there was ‘no major damage’ and that has proved to be the case as the 26-year-old has been named in the wider squad for Saturday’s Heineken Cup encounter with the Scarlets.

Kearney had been in plenty of pain when he first picked up the injury, mainly due to the presence of a large haematoma, but it now looks like it will only have prevented him playing in two games.

He sat out the Aviva Stadium win over Munster and the narrow European success at home to Exeter but a press release from the continental champions states that both he and fellow Lion Gordon D’Arcy ‘are likely to be available for selection’ in Llanelli.

If he does feature in West Wales, Kearney will be making just his second appearance of the season having been rested until the Connacht game after touring New Zealand with Ireland in the summer.

Despite his lack of game time this season, Kearney still appears to be the favourite for the Lions’ No15 shirt when Britain and Ireland’s elite head Down Under in 2013 but he faces stiff competition from fellow Lion Leigh Halfpenny, as well as Scotland’s Stuart Hogg and England’s Ben Foden, while Mike Brown has been in fine form for Harlequins.

Kearney featured in all three Tests for the Lions three years ago, coming on as a replacement for Lee Byrne in the first, scoring the opening try in the second and tasting victory in the third.