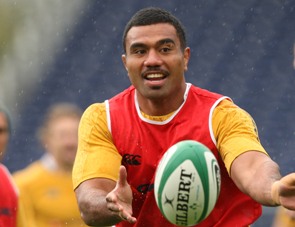 The Waratahs back rower will start at No8 in Brisbane as the Wallabies look to avenge two Rugby Championship defeats to their trans-Tasman rivals earlier this season.

Palu is finally fit again after missing all six tournament games against the All Blacks, Pumas and Springboks with a shoulder problem.

The 30-year-old has endured a nightmare two years on the injury front, sitting out the entire 2010 international season and making just six Super Rugby appearances in 2011. He proved his fitness just in time to make the Wallaby World Cup squad but injury forced him home early. He was picked to feature in all three summer Tests against Wales but hasn’t been available since then.

Palu is joined in the starting line up by another returning Wallaby veteran in Adam-Ashley Cooper. His Waratahs team-mate is named on the left wing after missing last week’s victory in Argentina with concussion.

Radike Samo is rested to make accommodate Palu, while Digby Ioane’s absence with minor knee damage paves the way for Ashley-Cooper’s return out wide rather than in midfield.

"They're both proven Test performers so it is good to have them back," was head coach Robbie Deans’ brief assessment of his decision to include Palu and Ashley-Cooper.

"Wyclif’s got a presence. He's very good around the contact (area). We're just looking to unleash him and see how he goes.

"The All Blacks are very effective around the contact so to have someone like Cliffy down the inside channel, where the All Blacks apply a lot of resource, it'll be good to have him…providing resistance.

"The All Blacks are the benchmark and proved it again through the Rugby Championship. They are a step up from where we've been.

"But the guys have shown a lot of resilience over the last two months, and they're excited about the opportunity ahead of them on the weekend."

Benn Robinson comes in for James Slipper at loosehead prop, with Mike Harries retaining the goalkicking duties from full back and Kurtley Beale again chosen at fly-half.

Sitaleki Timani moves from the blindside flank to the second row, with Scott Higginbotham stepping up from the bench to wear the No6 shirt.

Experienced wing Drew Mitchell makes it on to the replacements’ bench after his miraculous recovery from an ankle injury that had threatened to rule him out until the middle of next year.

Saia Fainga’a has become the latest Wallaby to be struck down with injury, though, after he broke his hand in training. Fainga’a who had taken over from fellow injury victim Stephen Moore, has been replaced in the matchday squad by uncapped Reds colleague James Hanson.