O’Connor out of autumn Tests

The Wallabies will be without star utility back James O'Connor when they head to Europe next month. [more] 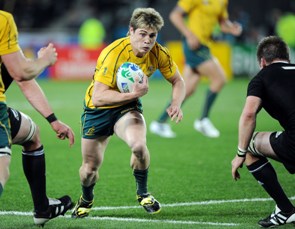 The Wallabies will be without star utility back James O’Connor when they head to Europe next month.

O’Connor won’t feature in the successive Tests with France, England, Italy and Wales after he failed to recover from a hamstring injury.

The 23-year-old has been out of action since the end of June having suffered a strain in the Rebels’ Super 15 loss to the Reds.

He missed the surprise defeat to Scotland and the series whitewash of the Welsh but had hoped to make his return in the third game of the inaugural Rugby Championship on September 8.

But despite both he and head coach Robbie Deans appearing confident that he would either feature in that home tie with the Springboks or the following week’s clash with Argentina, O’Connor sat out the entire tournament as his fellow Wallabies dropped like flies around him.

“Just had meeting with doc – looks like ill be in rehab til after spring tour,” O’Connor tweeted today.

"Been a tough year but also many positives have come from it.

That ‘huge year’ centres around the arrival of the Lions next summer but O’Connor may well have gone 18 months without representing his country by the time the three-match series kicks off on June 22.

O’Connor hasn’t worn Wallaby colours since the win over Wales in Cardiff last December and the Australian Rugby Union have no international fixtures publically planned on home soil before facing the Lions.

O’Connor is currently without much game time of any sort in 2012 after a lacerated liver disrupted his Super Rugby campaign prior to his hamstring problem.

There could be some good news on the horizon for the Wallabies, however, with the possibility of captain James Horwill recovering from his own hamstring troubles in time for the tour, although stand-in skipper David Pocock has come close to ruling himself out of the trip to Europe.

And today’s announcement regarding O’Connor just about sums up the Wallabies’ season on the injury front. Just as they start to celebrate some positive steps with the return of No8 Wycliff Palu and prop Sekope Kepu, they almost immediately lose Digby Ioane, Dom Shipperley, Saia Fainga'a, Ben Alexander and now O’Connor.