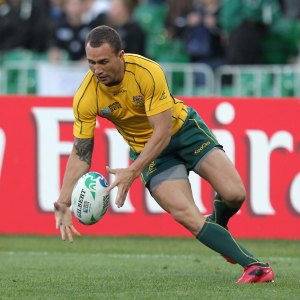 Cooper and Australia hit the headlines last month after the maverick fly-half launched a series of attacks on the side’s style of play and labelled the in-camp atmosphere as “toxic”.

Head coach Robbie Deans is willing to build bridges with Cooper, but Connolly, who coached the Wallabies between 2006 to 2007, reckons he should be slapped with an extensive ban.

"It's unforgivable what Cooper did," said Connolly.

"You can't imagine one of the All Blacks criticising (coach Steve) Hansen and the game.

"It's just ridiculous what's happened and I hope (the ARU) do make a strong statement. He's said he doesn't want to play for his country – well then that's fine.

"I don't think you treat the Wallabies coach or the country or the jersey or speak about the game the way he did without some severe ramifications – maybe a 12-month suspension from the game."

The Queensland Reds star, who is currently sidelined with a knee injury, intends to continue playing for the Super Rugby outfit.

But Cooper first needs to sign a new ARU contract. Discussions between the union and Queensland Reds are expected to be held in the coming days.