Kearney unfazed by lack of games

Ireland full back Rob Kearney says he isn't worried that he may not have any game time under his belt before the autumn Test with South Africa. [more] 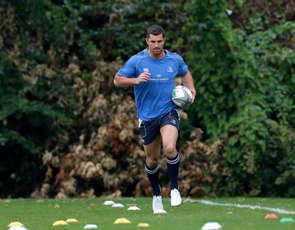 Ireland full back Rob Kearney says he isn’t worried that he may not have any game time under his belt before the autumn Test with South Africa.

Kearney suffered a back injury in Leinster’s shock PRO12 defeat to Connacht on September 28, with initial diagnosis suggesting he could be out of action for anything up to six weeks.

A more positive outlook seemed likely when the 26-year-old was named in Leinster’s wider squad for Saturday’s Heineken Cup win at the Scarlets but Kearney didn’t feature in West Wales and is not expected to play against the Blues this weekend either.

Leinster assistant coach Jonno Gibbes admits the European Champions remain in the dark as to the extent of the problem and they don’t intend to rush him back even though they’re ‘desperate to have him involved because of the class he has’.

“I think it’s best that he just takes his time, gets himself right, and we give him the opportunity to let whatever that injury is heal,” said Gibbes.

Such sentiments suggest that a return date for the 2009 Test Lion is still uncertain despite Ireland’s opening November Test with the Boks being less than three weeks away.

Even Kearney can’t give a definitive answer on when he will be back in action but he remains confident that he can perform for his country if selected, even without a run of domestic games behind him.

"In an ideal world, you would like to get a couple of games under your belt, but I'm not going to be too fazed by it," Kearney, who has played just 32 minutes of rugby since Ireland’s summer tour of New Zealand, told the Irish Independent.

"I came back into an international before the World Cup after being out for nine months and it went okay, so it is something I have done before.

"While ideally I'd be able to get a few games under my belt, if that's not the case then we don't live in a perfect world."