Wallaby full back Mike Harris says playing at venues like Twickenham and the Millennium Stadium would be a 'dream come true'. [more] 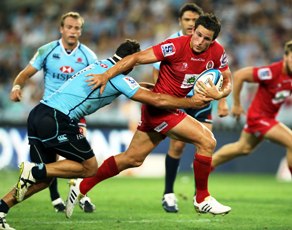 Wallaby full back Mike Harris says playing at venues like Twickenham and the Millennium Stadium would be a ‘dream come true’.

The New Zealand born Reds back will tomorrow be named in Australia’s squad to tour Europe in November and December, just a few months after winning his first Wallaby cap.

Harris only made his international bow in the summer clash with Scotland but he has already proved his worth on the big stage.

The 24-year-old slotted the winning penalty with the clock already in the red when Australia beat Wales in the second Test in Melbourne back in June and he repeated his goal-kicking heroics in Saturday’s 18-18 draw with the All Blacks.

Harris was successful with five penalties in Brisbane as he finished with a 100 per cent record with the boot in a much-improved Wallaby display.

And now it would take a brave man to drop him from the Wallaby backline for the upcoming clashes with France, England, Italy and Wales, even though Berrick Barnes will be back fit and ready to challenge him for the full back slot.

"It would be a dream come true to start and kick goals at those stadiums – it doesn't get much bigger than that," said Harris, who could feature in the centre if Deans opts to start Barnes at the back.

"Berrick is coming back from a severe punctured lung so hopefully he'll be ready to tour with us and that will create a selection dilemma for Robbie.

"Having had minimal games at fullback in my career I feel I'm getting more comfortable there with every chance I get to put the 15 jersey on."

Harris’ position in the Wallaby set up was heavily criticized by All Black boss Steve Hansen last week as the former Wales chief accused the Australian Rugby Union of poaching New Zealand players.

An ex-New Zealand U20 squad member and Schools international, Harris left his homeland to take up a Super Rugby contract in Queensland in 2011 after Auckland Blues decided against including him in their plans despite his impressive form for North Harbour in the NPC.

Harris qualifies for Australia through his grandmother and he therefore jumped at the chance to wear green and gold this summer despite his history with the Baby Blacks.

And while Hansen’s comments took Harris by surprise and received plenty of headlines worldwide, fellow Wallaby Digby Ioane is among those to have jumped to his defence.

"Mike was not wanted in New Zealand so he took his opportunity here in Australia with the Reds and now he's repaying the faith Australia had in him," said Ioane, who was himself born in New Zealand but could also have represented Samoa instead of the Wallabies.

"I just don't get those comments. I don't understand why Kiwis are not just happy to see Mike succeed.

"Mike just took his opportunity and Kiwis should be proud of him. He's succeeded in international rugby.

"Australia got me to where I am today and developed my rugby so that's why I play for Australia.