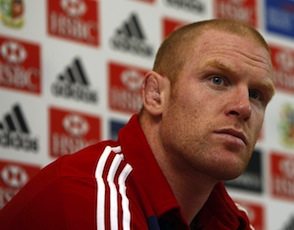 Munster have hailed the return to form of former Lions captain Paul O’Connell.

The colossal second-row was been plagued by injuries last season, including a persistent knee problem.

But after returning to action against Racing Metro 92 two weeks ago, O’Connell starred in the Irish province’s Heineken Cup victory over Edinburgh on Sunday.

Now Munster head coach Rob Penney reckons the 33-year-old, who skippered the Lions three years ago in South Africa, is nearing a return to his best as Ireland approach their autumn series.

“We all know what he is capable of and it’s just lovely to see him looking in really good shape and giving it for 60 minutes,” said Penney.

“He had been terrific over the last two weeks and having a full week’s worth preparation he’s just gone up a level.”

Penney admits O’Connell’s prolonged period on the sidelines was frustrating but he hopes the Munster talisman will be rewarded in the coming weeks with both province and country.

“He was as frustrated as anybody with being injured and the patience shown was a really food lesson to us about letting a guy get on with what he needs to do and not trying to rush him back,” added Penney.

“As he heads into the next few weeks hopefully he can stay on the park and be rewarded for his patience and diligence with some consistent rugby.”