Brian O'Driscoll should be fit for Ireland's autumn campaign despite suffering an ankle injury at the weekend. [more] 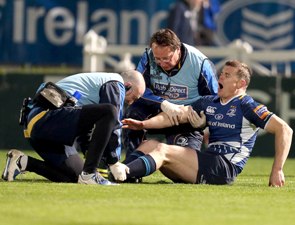 Brian O’Driscoll should be fit for Ireland’s autumn campaign despite suffering an ankle injury at the weekend.

O’Driscoll was forced off the field early on in Leinster’s nine-try thumping of Cardiff Blues at the RDS on Saturday, just a fortnight before Ireland begin their November campaign against South Africa at the Aviva Stadium.

The triple Lions tourist was immediately considered a doubt for the clash with the Springboks but a scan has since shown the damage is not as bad as at first feared.

O’Driscoll will be monitored in the lead up to that match but is expected to fit to captain his country in the first of two Tests and one non-cap international next month.

Much has been made of O’Driscoll’s age in the lead up to what he hopes will be his fourth Lions tour next summer and he copped plenty of criticism for the way he was outpaced by Gareth Maule for the Scarlets’ solitary try in Llanelli the weekend before last, yet Warren Gatland couldn’t have been anything other than impressed with the form he showed against the Blues.

The 33-year-old had been in sublime form in the 23 minutes before his enforced departure in Dublin, setting up Ian Madigan for his side’s second score with a brilliant break from deep in his own territory.

O’Driscoll was then the central figure for Leinster’s third try as his initial burst put the Blues on the back foot before his second involvement in the same play saw proved even more decisive. The veteran centre somehow offloaded possession behind the back of Alex Cuthbert’s heavy tackle and his individual brilliance allowed Kevin McLaughlin to hand Jamie Heaslip a simple run in.

As for the rest of the Ireland squad, head coach Declan Kidney has added a further seven names to his initial 31-man party for the clashes with the Boks, Fiji and Argentina.

Kidney has also brought in Leinster hooker Sean Cronin – Rory Best picked up a knock at the weekend -and Connacht wing Tiernan O'Halloran, but the biggest headline maker is Michael Bent.

The New Zealand prop, who qualifies for Ireland through his maternal grandmother, has been handed a national squad spot before making a single appearance for Leinster.

Bent has been playing regularly for Taranaki in the NPC but hasn’t yet joined up with his the Heineken Cup holders. The 26-year-old former Hurricanes squad member arrived in Ireland yesterday and will train with his adopted country for the first time today.