Lions hopeful Luke Charteris has handed Wales a welcome good news story after his club claimed he is free to face Australia on December 1. [more] 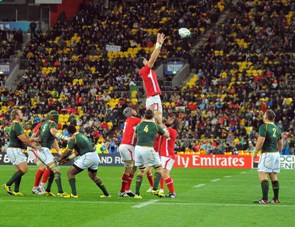 Lions hopeful Luke Charteris has handed Wales a welcome good news story after his club claimed he is free to face Australia on December 1.

The last of Wales’ four autumn internationals falls outside the International Rugby Board’s official window for Test matches meaning Perpignan could have prevented Charteris from featuring against the Wallabies.

But the French club have now made the giant second row available for that particular encounter and have instead requested that he be rested for the autumn opener against Argentina on November 10.

Perpignan have decided that they would have rather have the former Newport Gwent Dragons captain around for their tough Top14 encounter at Biarritz in a fortnight rather than the seemingly straightforward home tie with struggling Agen on the day the Aussies arrive in Cardiff.

The Welsh Rugby Union are yet to confirm Perpignan’s offer but it would be a surprise if they turned down the request given the importance of a sixth fixture with the Wallabies in just over a year.

Wales have lost all five fixtures to the Lions’ next opponents since they met in the Bronze Medal match at the 2011 World Cup and to have one of their best performers at that tournament in contention to face them at the Millennium Stadium would be a big boost for caretaker coach Rob Howley.

Charteris was outstanding down in New Zealand this time last year as Wales made the World Cup semi-finals but a wrist injury in that third place play-off saw him sidelined until the final two games of the 2012 Six Nations.

The 29-year-old featured from the bench in the Grand Slam clinching wins over Italy and France before starting the first Test against the Wallabies in Brisbane and then coming on as a replacement in Melbourne and Sydney.

His form last year saw him heavily tipped for a Lions spot but he first faces stiff competition for a place in the Welsh second row as Alun Wyn Jones, Bradley Davies and Ian Evans have all impressed in recent months.

There is no suggestion that a similar deal has been mooted for fellow Perpignan star James Hook, though, or indeed for Toulon prop Gethin Jenkins, Bayonne scrum-half Mike Phillips or Bath’s Paul James.

Wales are currently on a training camp in Poland until November 5 but their non-Welsh based players are not among those taking part in Spala.