Wallaby scrum-half Nick Phipps says next year will be the biggest in the history of Melbourne rugby. [more] 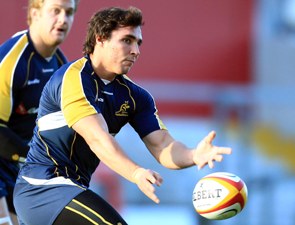 Wallaby scrum-half Nick Phipps says next year will be the biggest in the history of Melbourne rugby.

Phipps has been part of the Rebels set up since they joined the Reds, Waratahs, Brumbies and Force to become the fifth Australian franchise in 2011.

And while the side has finished 15th and 13th in their two seasons of Super Rugby so far, a city known for its love of Australian Rules Football has embraced rugby union wholeheartedly.

With the likes of Jmaes O’Connor, Kurtley Beale and now Scott Higginbotham in their ranks, the future looks bright for the sport in Victoria as they prepare to face the Lions at AAMI Park and host the second Test between Britain and Ireland’s elite and the Wallabies in 2013.

"This next season will be the biggest year of Rugby Union for Melbourne and Victoria ever," said Phipps, who is back in the city for a two-day Rebels training camp before heading to Europe with the Wallabies.

"The Rebels will play The British & Irish Lions, as will the Wallabies, and we play the opening match for the 2013 Super Rugby competition at AAMI Park.

"Melbourne is a special place to me. It's where I got my first chance at Super Rugby. Every time I visit I get the same excitement as though it was my first match. There is a certain energy about it. It feels good to be home."

"The first two years have gone so quickly, I think the team and I have gained so much in such a short space of time."

Phipps is set to start the autumn tour opener against France on November 10 having filled in for the injured Will Genia for most of the Rugby Championship.

Genia won’t be back in action until February, leaving Phipps with a real opportunity to cement his halfback partnership with fellow Rebel Kurtley Beale.

The pair have impressed in their short time together in the national jersey and a further run of games is set to have a positive impact for both club and country.

"Every match I feel we are developing an appreciation of each other's play, " added Phipps.

"We are tough on each other for a reason – because we want to be better.

"There is no doubt that will be beneficial when we play together at AAMI Park for the Rebels in 2013."