Ireland have been dealt a major double blow after Brian O'Driscoll and Rory Best were ruled out of their autumn series. [more] 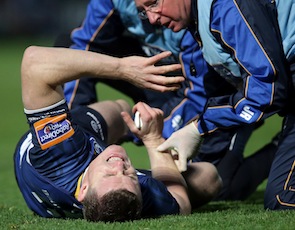 Ireland have been dealt a major double blow after Brian O’Driscoll and Rory Best were ruled out of their autumn series.

Three-tour former Lion O’Driscoll picked up an ankle injury in the first-half of Leinster’s 59-22 victory over Cardiff Blues last weekend.

Leinster head coach Joe Schmidt was initially optimistic over the veteran centre but it has now been revealed that he requires surgery.

O’Driscoll is now set for up to 12 weeks on the sidlines, also ruling him out of action until mid-January.

“O'Driscoll picked up an ankle injury in the game against the Cardiff Blues and following further scans and specialist review by the Ireland medical team, it has been decided that the injury will require surgery to repair ligament damage, ruling out

O'Driscoll from playing for 8-12 weeks,” read a statement released by the Irish Rugby Union.

It is just the latest set-back for O’Driscoll, who missed much of last season due to a shoulder injury. The star centre is targeting a fourth Lions tour and would have been desperate to impress in Ireland’s upcoming Tests with South Africa, Fiji and Argentina.

Ulster hooker Rory Best has also been touted as a 2013 Lions tourist but is also set for a prolonged period on the sidelines.
Best suffered a neck injury during the unbeaten provinces’ victory over Newport Gwent Dragons and faces up to six weeks out of action.

“Rory Best been ruled out of the games against South Africa, Fiji and Argentina, due to a neck injury he sustained last Friday playing in the Rabodirect Pro12 game in Wales against the Dragons,” added the statement.

“Following a scan and medical review, it was confirmed that Best has sprained ligaments in his neck which will require a rest and rehabilitation period of between 4-6 weeks before a further assessment of the injury.”