Former Lion Lewis Moody reckons stopping David Pocock and winning the battle of the breakdown will be crucial if the next pride of Lions are to secure series success in Australia. [more] 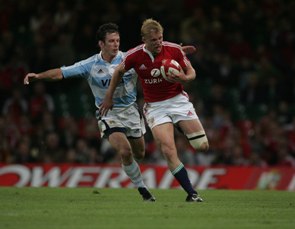 Former Lion Lewis Moody reckons stopping David Pocock and winning the battle of the breakdown will be crucial if the next pride of Lions are to secure series success in Australia.

Moody was a Test Lion on the 2005 trip to New Zealand when Richie McCaw provided the platform for the All Blacks to run riot and he knows that stopping the world’s other most prominent openside could ensure it’s an altogether different scenario across the Tasman.

“David Pocock’s a very good player. He’s been sorely missed in the Australia team and his return will be welcomed. He’ll certainly be one of the players the Lions will be targeting,” said Moody, who was a try scorer in the third Test with the Kiwis seven years ago.

“He’s so strong. His upper body strength, and his arms and chest in particular, mean that, once he’s on that ball, he’s like a limpet and very hard to remove.

“The key for the Lions is to take him out of the equation before he can get to the ball! It’s the way we used to deal with McCaw – get in his line and don’t let him get on the ball because, once they’re in there, they’re very hard to move.”

Moody is convinced the Lions possess the personnel to combat the Aussie snaffler, though, with Wales skipper Sam Warburton his tip to start at seven for Britain and Ireland’s elite.

But whoever Warren Gatland picks in that role in Brisbane, Melbourne and Sydney next summer, Moody insists it will be the balance of the back row and the work ethic of the team as a whole that determine whether the Lions rule at ruck time.

“There are a lot of players who are putting their hand up for that seven shirt,” added Moody.

“It could be Sam Warburton or Chris Robshaw, or even Justin Tipuric who’s pushing Warburton for Wales.

“Sam had a fantastic year last year. He’s struggled with injury but, if he can remain fit, I think he’ll be the first-choice seven.

“From a setpiece, the breakdown is normally a seven-on-seven thing in terms of beating that guy to the ball but around the pitch you rely on the rest of the team to do their jobs.

“It’s about clearing rucks, getting to the breakdown before the opposition and making sure that, when you get there, you move people out of the way at the first point of contact.

“That’s something that a lot of backs have struggled with in the past but it’s something that’s changing now in the modern game, especially as the backs are getting bigger and bigger these days.

“You have to have a balanced back row and there are so many variables and so many options for the Lions.

“Back row is always such a strong position so the difficult thing is that there will be a lot of quality players who miss out on a Lions tour. That’s good for the Lions because it just shows how much quality there is out there.”