Wallaby hooker Stephen Moore says the scrum will be a major battleground on his team's tour of Europe. [more] 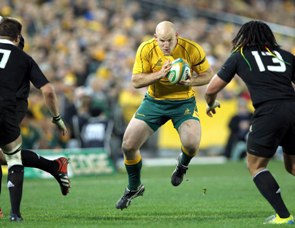 Wallaby hooker Stephen Moore says the scrum will be a major battleground on his team’s tour of Europe.

The Aussie setpiece has faced fierce criticism in recent years and Moore expects a huge test of their credentials when they face France, England, Italy and Wales this month and next.

The Wallaby front five have shown they can compete at the highest level on occasion but Moore knows the autumn series will be all about proving they can do so on a consistent basis.

''Everyone can scrummage well but you've got to do it over one Test, two Tests, three Tests, four. That's going to be the big theme of the tour as far as the scrum goes,'' Moore, who has recovered from a hamstring problem in time to travel to Europe, told the Sydney Morning Herald.

''They put a lot of time into their forward play, and part of that is the nature of the way rugby is played over there.

''The Heineken Cup is probably a bit more similar to Test rugby than Super Rugby is, so these guys are playing that style of game week in week out. So the forwards battles in these Test matches are certainly going to be very important to the result.''

Australia put more than 50 points on the French the last time the two teams met but even then Moore admits the scrummage wasn’t as successful as he and his colleagues would have liked.

''That game we won in Paris, I wasn't particularly happy with how the scrum went, particularly in the first half,'' added Moore.

''We were under a bit of pressure, so we sort of squared it up in the second half. We just needed to be consistent.''

It’s a view echoed by Wallaby openside David Pocock who is keen to see how far the Wallabies have come after plenty of hard work on scrum technique on the training park.

''It's such a big focus over there, they love scrums,'' said Pocock.

''In Australia crowds just want to see tries and running rugby, whereas over there people get pretty excited about scrums and rolling mauls. It's a different mindset.

''Scrums have obviously been a focus for us in terms of development, and that's showed over the Rugby Championship where it hasn't been an issue for us. (Former scrum coach Patricio Noriega) and Andrew Blades have made a big difference.''