Sir Ian McGeechan has echoed the thoughts of so many of our followers on facebook and twitter by suggesting that the back row will be the most competitive position when it comes to selection for the 2013 Lions tour. [more] 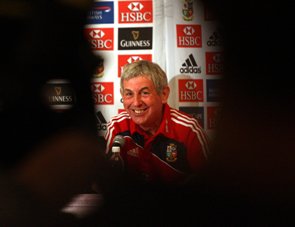 Sir Ian McGeechan has echoed the thoughts of so many of our followers on facebook and twitter by suggesting that the back row will be the most competitive position when it comes to selection for the 2013 Lions tour.

Britain and Ireland’s elite head Down Under for a 10-game adventure next summer, with head coach Warren Gatland due to name his travelling party sometime in the spring.

And while there is still plenty of opportunities for the candidates to press their claims or cement a squad place, McGeechan expects a host of big names to be left out due to the sheer number of star peformers available for selection at No6, 7 and 8.

"The back row is going to be incredibly competitive," McGeechan told the Sunday Herald, as he stressed that selection will come to down to far more than simply individual abilities on the field.

"There are back-row players around just now who would normally go on the Lions tour but just won't be able to win a place because the competition is so strong.

"There are so many good players in all four countries, so a lot of it will come down to performance over the next five or six months.

"Lions selection is so different from any other that you do. A player is picked out of his peers in four countries.

"As Lions coach, you can see what a player can do in one context but you have to think of how they will play in another.

"Sometimes it's about drawing something out of a player and you have to look beyond the individuals to the team."

As for selection of Gatland’s backroom staff, McGeechan believes his replacement as head coach will opt for an element of continuity and familiarity among his choices.

Gatland has yet to say who will be joining him in Hong Kong and Australia but McGeechan expects to see at least a couple of the people who toured South Africa with the Lions under his stewardship three years ago.

"I think you have got to go with people you trust and who you know," added McGeechan.

"I certainly went with people I knew well and who I knew I could work with and got them into place early, not just the coaches but the medical, strength and conditioning, analysis – they were people I knew very well," added McGeechan.

"When there is only something like five or six weeks from the initial preparation up to the first Test, you need to be pretty honest and have honest answers. You can't afford to grow that.

"If you have people you have worked with and trust and they trust you then I think it gives you a quick start and enables you to have everything in place.

"Warren will go with who he trusts and is a good man-manager. He sets really good environments and you can see that with Wales and everywhere else he has been. Andy Irvine as manager knows that as well so I think the management side of things is an exciting prospect."