Jarvis in but Phillips misses out

Aaron Jarvis will make his Wales debut against Argentina on Saturday but Lions scrum-half Mike Phillips has been dropped to the bench. [more] 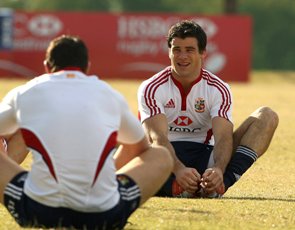 Aaron Jarvis will make his Wales debut against Argentina on Saturday but Lions scrum-half Mike Phillips has been dropped to the bench.

Jarvis has beaten fellow uncapped front rower Samson Lee and versatile Bath prop Paul James to the No3 shirt in a Wales XV that shows seven changes from the side that faced Australia last time out.

Having started all three Tests Down Under in the summer, Phillips has been left out of the starting XV after Knoyle impressed in training in Poland while he was on club duty with Bayonne in the Top 14.

Fellow Lion Jamie Roberts returns from injury to partner Scott Williams in the centres, with both Jonathan Davies and Ashley Beck ruled out through injury having started in Sydney.

Ian Evans is recalled in the second row ahead of Bradley Davies, Scarlets flanker Josh Turnbull comes in for the injured Dan Lydiate on the blindside and Toby Faletau returns for Ryan Jones as the former national captain continues his rehab on a shoulder problem.

Skipper Sam Warburton retains the No7 shirt ahead of in-form Justin Tipuric and Rhys Priestland is preferred at fly-half over James Hook, who is named among the replacements, and Dan Biggar, who misses out altogether.

“One or two injuries have forced our hands in certain areas in terms of selection, but the fact that we are still able to field a side packed with Grand Slam experience shows that we have been able to develop some depth in recent years,” said Wales caretaker coach coach Rob Howley.

“There are obvious opportunities for the likes of Aaron, Tavis at scrum-half and Josh in the back row, to pull on the jersey against Argentina and try to make it their own.

“We all know how important a good start against the Pumas will be to our November series, they arrive battle-hardened after a tough Rugby Championship campaign.

“They will be looking to silence the Millennium Stadium crowd from the outset and we know we can’t afford to let that happen, with a successful campaign this Autumn vital to our ambitions for the future.”

Jonathan Davies was unavailable for selection after failing to fully recover from the groin injury he sustained whilst on Scarlets duty against Clermont Auvergne in the Heineken Cup, while Beck will be given more time to recover from an ongoing hip problem.

Beck is expected to be fit to face Samoa a week on Friday and Davies will be continually monitored as Wales also prepare to take on New Zealand and Australia over the next four weeks.