Kidney knows Heaslip will step up

Ireland coach Declan Kidney is convinced Jamie Heaslip will lead by example when he captains his country for the first time this weekend. [more] 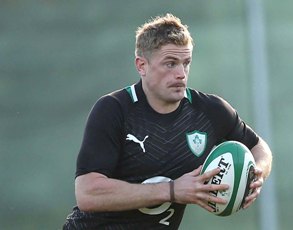 Ireland coach Declan Kidney is convinced Jamie Heaslip will lead by example when he captains his country for the first time this weekend.

Heaslip will skipper the Irish against South Africa at the Aviva Stadium on Saturday in the absence of veteran captains Brian O’Driscoll and Paul O’Connell.

Rory Best has been the usual replacement when the former Lions leaders have been unavailable but he too is ruled out of the autumn opener through injury.

Heaslip has therefore been chosen above Jonathan Sexton to wear the captain’s armband for the clash with the Springboks and Kidney believes he has the right man for the job despite the fact that the 2009 Lions No8 has little official leadership experience.

"Although he'd probably deny it, Jamie is the consummate professional. When he turns up for work he's really zeroed in," said Kidney.

"That's a good place to start – leading by example. He's been part of this group for a few years now.

"There were other guys holding their hands up for the job but the time is right for Jamie.

"We talked with Jamie about the captaincy over the past year and he's shown good potential for the job with Leinster."

As well as picking a new skipper, Kidney has handed a Test debut to South African-born and raised hooker Richardt Strauss after the Leinster front rower qualified on residency grounds three years after facing the Lions with the Cheetahs back in his homeland. Strauss will go head-to-head with his cousin Adrian Strauss after the latter was named in the No2 shirt for the Boks.

Munster wing Simon Zebo starts at full back in the absence of Rob Kearney, with Tommy Bowe and Andrew Trimble named out wide, while Keith Earls is chosen to replace O’Driscoll at outside centre.

Connacht’s Mike McCarthy gets the nod alongside Donnacha Ryan in the second row, with Peter O’Mahony and Chris Henry starting on the flanks in place of the injured Stephen Ferris and Sean O’Brien.

Michael Bent could make his debut from the replacements’ bench just days after arriving in Ireland from New Zealand, while Ulster back rower Iain Henderson is a another potential debutant despite having made just six first-team appearances for his province.