The Wallabies have made three changes to their starting XV to face France this weekend but Mike Harris has beaten Berrick Barnes to the fullback slot. [more] 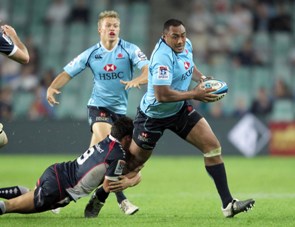 The Wallabies have made three changes to their starting XV to face France this weekend but Mike Harris has beaten Berrick Barnes to the fullback slot.

The trio of alterations from the team that drew 18-18 with New Zealand last time out all come in the forward pack as Sekope Kepu, Kane Douglas and Dave Dennis are handed starting berths.

Prop Kepu is the only unforced change, with head coach Robbie Deans picking him over James Slipper, who drops to the bench.

Lock Douglas and blindside flanker Dennis come in for the injured Sitaleki Timani and suspended Scott Higginbotham respectively having both been used as first-half replacements against the All Blacks.

"We have more competition for places now than we have had at times previously, and that's only going to help drive standards and performance," said Deans.

"The playing group are excited and they are looking forward to the game this weekend. The atmosphere at the Stade de France is always fantastic and the crowd vociferous: it's a great place to play the game, and a magnificent experience that none of the players who are fortunate enough to put on a jersey on the weekend will ever forget."

Barnes is back fit again after missing the last two games with a punctured lung but Deans has resisted the option to bring him straight into his first-choice XV.

The versatile playmaker has been one of his coach’s favourites during Deans’ four years in charge and had been a serious contender for an immediate recall against the French. But Deans has instead kept faith with Kurtley Beale at fly-half, Pat McCabe at inside centre and Harris at full back for the opening autumn international.

Barnes does win a spot in the matchday 23 ahead of wing Drew Mitchell and his joined in the squad by fellow injury returnee Sall featured from the replacements bench in Brisbane Stephen Moore.

Moorehas been unavailable for the past five fixtures due to a hamstring complaint but is now finally in line to become his country’s most-capped hooker if he replaces Tatafu Polota Nau at the Stade de France.

With squad numbers being increased from 22 to allow the addition of an extra prop, uncapped Waratahs front rower Paddy Ryan is also included, while Timani’s absence leads to a promotion for second row Rob Simmons.

David Pocock is not yet fit to return from a knee problem but he is expected to play some part against England at Twickenham next week.