Not what the Wallabies wanted

The Wallabies began their four-match tour of Europe in disastrous fashion as they lost 33-6 to France. [more] 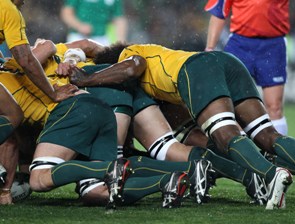 The Wallabies began their four-match tour of Europe in disastrous fashion as they lost 33-6 to France.

Robbie Deans’ side were second best to a rampant French outfit who ended their five-match losing streak to the Wallabies in spectacular fashion.

Deans was left with plenty to think about ahead of next week’s trip to Twickenham and the forthcoming encounters with Italy and Wales as his side succumbed to French power in the pack and accuracy out wide.

France outscored the Lions’ next opponents by three tries to none, with the Wallabies failing to trouble the scoreboard for the final 59 minutes in what was just their second defeat in 19 years in the French capital.

An early Louis Picamoles try had the French 10-3 up after 14 minutes and, even though the Wallabies dominated much of the remainder of the half, they were even further behind by the break.

A second Mike Harris penalty cut the gap to four with 21 minutes played but a late Freddie Michalak penalty and even later drop goal had the hosts 16-6 ahead at the interval.

Australia’s handling let them down for much of the first period and the slippery conditions couldn’t be held solely responsibly for their lack of composure in the final third. They had enough territory to have led after the first 40 but they never really looked like adding to their poor try tally in the Rugby Championship – a competition in which they failed to pick up a try-scoring bonus point in any of their six fixtures.

The Wallabies won the second half 46-3 the last time they were at the Stade de France but any hopes of a similar outcome were completely dismissed when Wesley Fofana crossed for a second French try after 55 minutes.

Michalak’s conversion had the hosts 17 points clear and things got even worse for the Wallabies when referee Nigel Owens awarded a penalty try after the French pack destroyed the visitors at scrum time nine minutes later.

Replacement Rob Simmons was fortunate not to be yellow or red carded for a spear tackle on Yannick Nyanga moments later after Owens and his assistants failed to identify his number but the Reds second row could well be cited for his carelessness.

Adam Ashley-Cooper had a potential try disallowed by the TMO after Morgan Parra got his hands underneath the ball over the try line and Parra then rubbed salt in the wounds by slotting a long-range penalty with three minutes remaining.

The Wallabies should at least have influential openside David Pocock back for the clash with England on Saturday but, unless they sort out their weakness at the setpiece, it is difficult to envisage them leaving London with anything other than further disappointment just eight months out from the 2013 series with the Lions.