Tommy Bowe insists it is not time to panic despite Ireland falling to a fifth straight defeat. [more] 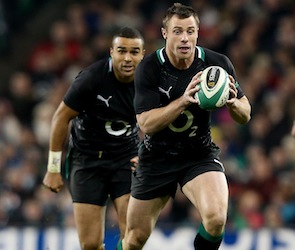 Tommy Bowe insists it is not time to panic despite Ireland falling to a fifth straight defeat.

The injury-ravaged Irish were edged out 16-12 in Dublin as they kicked off their autumn schedule with defeat against South Africa.

They led by nine-points at the break but were outmuscled by the Springboks in the second-half and were put to the sword.

Bowe, a Test Lion in 2009 and targeting a second tour, admits the loss was disappointing but he insists there is still plenty to be positive about ahead of their clashes with Fiji and Argentina.

"There really isn't a feeling that the team is going through a difficult period," said Bowe.

"There's been a lot of confidence in the squad over the last couple of weeks.

"Everyone was upbeat and was looking forward to South Africa. I felt that we'd go after them and win – we'd targeted this match.

“Having lost it we'll have to reassess that. It was a disappointing defeat because we had set ourselves up perfectly in the first half.

“We've worked so hard to build a bond, get the intensity and accuracy up. It showed at times, but when it counted in the second half we weren't able to pull it out."

Ireland have been plagued by injuries in the build-up to the autumn series. Former Lions captains Brian O’Driscoll and Paul O’Connell are the most notable absentees while Rob Kearney, Stephen Ferris, Rory best and Sean O’Brien are also on the sidelines.

But the Ulster flyer was impressed by Ireland’s new boys and he is now relishing the upcoming encounters with Fiji and Argentina.

"There's been a lot of talk about the guys who are missing, but that will happen and there must be a new breed of player coming through,” added Bowe

"The guys who are missing, they have had their chance, they have taken their chance when they've had it, and whenever an opportunity comes to step into their boots, it's about stepping up to the plate and really showing what you've got.

"A lot of the guys really put their hand up yesterday and it's disappointing we didn't get the win to show for it.

"We're looking forward to Fiji next week and then obviously we have a massive match against Argentina. It's a case of getting the job done."