Alex Cuthbert insists he is happy to buck the trend of Wales stars heading to France. [more] 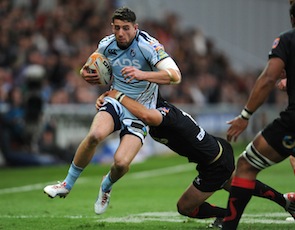 Alex Cuthbert insists he is happy to buck the trend of Wales stars heading to France.

The strapping Welsh wing, who has been tipped as a potential Lion, has been in red hot form this season but is out of contract with Cardiff Blues in the summer and there are fears he could join the growing exodus.

But the Blues have made tying Cuthbert down to a long-term contract a priority and he remains positive about his future in the Welsh capital.

Cuthbert said: “It’s my preference to stay. I’m still developing and still have so much to learn.

“I’m still young, in only my second season, so I feel quite privileged to hear the Blues say keeping me is a priority. I’m grateful to them for giving me a chance and feel I owe them.

“The results aren’t going the right way, but we are rebuilding and I knew it would take a couple of years.I know we have the players at the club and the club is working hard to attract some top players and to get some more experience in the squad.

“The region are at quite an exciting point, the start of something that is going to get better.”

Jamie Roberts confirmed last week that he will quit the Blues in the summer, with Racing Metro the likely destination. Dan Lydiate and Dan Biggar have also been linked to the big-spending Parisian club.

But Cuthbert, who hopes to face Samoa on Friday, is well aware of the benefits of staying in Wales.

“Being in the Wales environment helps a lot – working with Rob (Howley), Shaun (Edwards), Neil (Jenkins) and Warren (Gatland) is only going to further my development," added Cuthbert.

"The longer I’m in this environment, and the closer I am to it, is only going to be good for me.”

And Cuthbert’s immediate focus is on Samoa, who will be out to claim revenge for their slender loss to Wales at the World Cup.

“Samoa are going to be gunning for us after the boys beat them in the World Cup. They’re a big physical side and I’m looking forward to it."

“They will target the first twenty minutes and will come flying out at us. We have to weather their storm and once we can play our rugby hopefully we will come out on top.”