Rhino Rugby today unveiled the designs for the Official Ball range of the 2013 British & Irish Lions on the first day of Rugby Expo at Twickenham Stadium. [more] 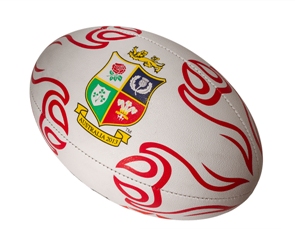 Rhino Rugby today unveiled the designs for the Official Ball range of the 2013 British & Irish Lions on the first day of Rugby Expo at Twickenham Stadium.

The key motif running through the whole of the collection by Rhino’s talented designer, Duncan Olner, is based on a lion’s paw with claws.

The top of the range international standard match ball, which the Lions will train with, and which will be the match ball for the historic fixture against the Barbarians in Hong Kong on June 1, is the Rhino Vortex Elite.

This is the match ball as used in the RaboDirect PRO12 which has been so well received in the last two seasons. Furthermore, the Vortex Elite has been shortlisted at the Rugby Expo Awards in the Technical Innovation category.

For the first time fans can also buy Lions supporters balls in all of the colours of the four participating nations in addition to the usual range of mini, midi and keyring balls, and a pink beach rugby ball.

“We are delighted to be Official Ball supplier to The British & Irish Lions for the second time, and are excited by the designs and colours of this collection. We hope that players, supporters and sponsors will enjoy them,” said Rhino Group CEO, Reg Clark.

“Rhino have been partners of the Lions for a number of years and we are excited to be using the Vortex Elite Ball for the Hong Kong game and in training,” added Charlie McEwen, Director of Sales & Marketing for the Lions.

“This ball has performed extremely well in other rugby competitions and we feel that it will be a great addition to the Tour.”

Rhino Rugby is the world’s leading supplier of scrummaging, machines contact and training equipment for rugby and is also Official Supplier to the Lions in this product category for the second successive tour, in addition to its role as Official Ball supplier. Rhino has recently been appointed Official Ball Supplier to the RFL and Super League in the league code in addition to its credentials with the RaboDirect PRO12 and the Lions in rugby union.