Tour over for Wallaby lock

The Wallabies will have to do without lock Rob Simmons for the rest of their European tour after he was handed an eight-week suspension. [more] 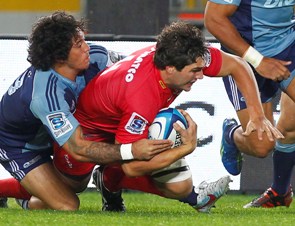 The Wallabies will have to do without lock Rob Simmons for the rest of their European tour after he was handed an eight-week suspension.

Simmons has been banned until February 25 for a dangerous tackle on France flanker Yannick Nyanga.

The Reds lock came on as a replacement in Paris and committed the offence midway through the second half of the 33-6 defeat at the Stade de France.

Australia were penalised by referee Nigel Owens at the time but Simmons escaped onfield repercussions as Owens and his assistants were unable to identify him as the tackler.

International Rugby Board judicial officer Robert Williams, who heard Simmons's case in London on Wednesday, said in a statement that he viewed the 23-year-old’s tip tackle to be at the "high end" of the scale of IRB sanctions.

In upholding the citing, Williams added two weeks "aggravation" from the high-end entry point of 12 weeks' punishment but then allowed the maximum six weeks mitigation based on Simmons "exemplary previous disciplinary record and his conduct at the hearing".

Simmons will miss his country’s clash with England at Twickenham on Saturday and the following week’s games with Italy and Wales in Florence and Cardiff respectively.

He will also be unavailable for the Reds’ opening Super 15 fixtures against the Brumbies and the Waratahs on February 16 and 23.

The Wallabies have not yet commented on whether a replacement will be called up but that scenario appears highly likely given the fact that fellow second row Kane Douglas is struggling with a knee injury.