When England, Ireland and Scotland kick off their respective autumn Tests this Saturday there will be just 200 days until all four Home Nations come together as one for the first game in Australia next summer. [more] 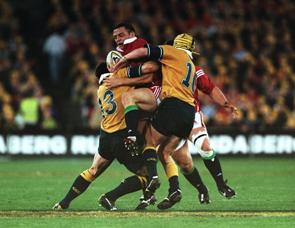 When England, Ireland and Scotland kick off their respective autumn Tests this Saturday there will be just 200 days until all four Home Nations come together as one for the first game in Australia next summer.

The Lions face the Western Force on June 5 in their opening game Down Under, four days after taking on the Barbarians in Hong Kong as they kick-off their latest adventure in style in Asia.

And while 200 days might still seem like a lifetime for some, just think about how short a timespan it is compared to the last time the Lions graced Australian soil.

Britain and Ireland’s elite haven’t faced an Aussie outfit since losing to the Wallabies on July 14, 2001 – and they’ve been desperate to end that long wait for another crack at the Green and Gold ever since Andrew Walker kicked the ball into touch to seal a 29-23 success for the hosts in a thrilling third Test some 11 years ago.

Most sides only have to wait a week or so to bounce back from defeat and less than a season to face the same opposition but the Lions had to wait four years for another crack at a southern hemisphere giant and a full 12 years to seek revenge over the Aussies.

That means 4,142 days have passed since Lions supporters packed into Stadium Australia for the heartbreaking final encounter against John Eales and co; it means there’s been more than 99,408 hours since a Sea of Red invaded Sydney or 5,964,480 minutes or even 357,868,800 seconds since Graham Henry’s men came agonizing close to beating the World Champions in their own backyard.