Wales lock Alun Wyn Jones' Lions hopes are in the balance as he faces a race against time to feature in the Six Nations. [more] 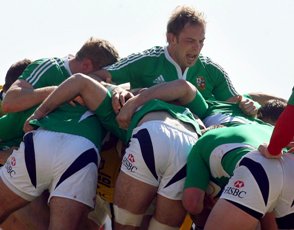 Wales lock Alun Wyn Jones’ Lions hopes are in the balance as he faces a race against time to feature in the Six Nations.

The 2009 Test Lion needs surgery on the shoulder injury that ruled him out of the remainder of his country’s autumn internationals.

Jones, who suffered the setback during Saturday’s 26-12 defeat to Argentina, needs an operation to reconstruct his AC joint ligaments.

The 27-year-old faces up to four months on the sidelines and is now a major doubt for much of Wales’ defence of their Grand Slam crown next spring.

“After carefully reviewing the scans and discussing the best management of the injury with specialists, in light of the extent of the ligament damage, the recommendation was made for Alun Wyn to undergo surgery to reconstruct the AC joint ligaments in order to give him the best chance of making a full recovery,” read an Ospreys statement.

“He is due to undergo the surgery at the end of this week,” added Ospreys head physio Chris Towers.

“We will be looking at a 12-16 week rehab process post-op to get him back on the field.”

As well as missing this Friday’s clash with Samoa and the following weeks’ Tests against New Zealand and Australia, Jones will be absent for the rest of his region’s Heineken Cup pool campaign.

Jones won’t be available for December’s back-to-back European encounters with French giants Toulouse or the home tie with Leicester and the away fixture with Treviso in January.

He will also be forced to sit out the RaboDirect PRO12 games with the Scarlets, Dragons and Zebre at the end of 2012 and the beginning of 2013, with the February 8 or 15 ties with Ulster or Connacht the earliest likely comeback date.

The length of the lay off will leave Jones with little time to press his claims for a second successive Lions adventure as Lions head coach Warren Gatland intends to name his travelling party at some stage in late April.