Pat McCabe may have been ruled out of the Wallabies' clash with England tomorrow but he knows that his team mates will need a strong start at Twickenham. [more] 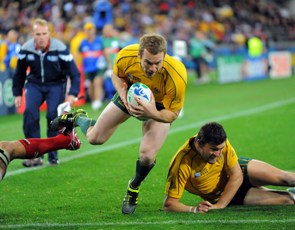 Pat McCabe may have been ruled out of the Wallabies’ clash with England tomorrow but he knows that his team mates will need a strong start at Twickenham.

McCabe was due to wear the No12 shirt in London before a neck injury prevented him from taking his place in the side and achieving what he described as a ‘huge honour’ and a ‘huge buzz’ with his first appearance at one of the world’s most iconic stadiums.

The Brumbies midfielder was part of his country’s 33-6 thrashing at the hands of the French last time out and he is aware that a similar scoreline and performance won’t be tolerated for a second week running.

And with England in high spirits having beaten Fiji 54-12 in their opening autumn international, McCabe wants the Wallabies to seize the initiative rather than what for a turnaround in their own fortunes.

“Especially away from home it’s particularly important for your confidence to start well.

“I guess in the first 20 it’s important for us to show that the weekend’s behind us and we’re up for the contest.

“We’re disappointed after last weekend but we’re just looking forward to starting well and attacking the game from the off.”

McCabe has never played against the English but the 24-year-old has been impressed with what he’s seen of the Red Rose under new head coach Stuart Lancaster.

A second-place finish in the 2012 Six Nations and a decent summer showing in South Africa hasn’t been lost on McCabe and he is in no doubt that his countrymen will have to rediscover their top form pretty quickly if they are to triumph at Twickenham.

“England have been extremely impressive. The way they’re moving the ball is very sharp and the speed of their breakdown ball and other things they’re doing have impressed me a lot. They’re obviously a team that has a clear idea of what they want to do out there at different stages and they’re extremely effective.

“I guess the Poms would have to be the favourites on the way they played at the weekend. If you look at the weekend’s results, they were outstanding and we were extremely poor.

“Favouritism isn’t something we speak a great deal about, though, and I can’t imagine they would do either. That’s something for everyone else to worry about – we’re just focused on putting a result together that we can be proud of.”