England captain Chris Robshaw admits some of his team-mates will spend their Saturday night in front of the TV dissecting today's loss to the Wallabies in a bid to bounce back against the Springboks. [more] 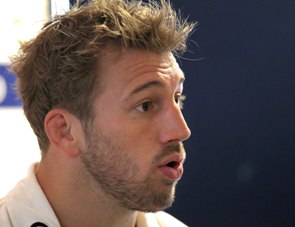 England captain Chris Robshaw admits some of his team-mates will spend their Saturday night in front of the TV dissecting today’s loss to the Wallabies in a bid to bounce back against the Springboks.

Robshaw and co were beaten 20-14 by the Lions’ next opponents and the Harlequins openside says the video analysis of a first autumn reverse could take place straight away for some.

“A lot of players will probably watch the video tonight as they probably won’t be able to sleep without seeing the game,” said Robshaw, as a Nick Cummins try and five Berrick Barnes penalties won the day for the Wallabies.

“We’ll probably have a sulk but you need to move forward. We need to learn quickly. We need to be a smart side and be able to adapt.

“This is where you learn how to react to other players. Some players may need a couple of days to get over it and someone might want to put it right tomorrow and get straight out there.

“It’s always hard to lose at home. But we’ve got to lick our wounds and move on. We have to make sure we have good review, look forward to South Africa and put this right.”

England showed glimpses of their talent at Twickenham as they looked to make use of the full width of the pitch but the Wallabies won the battle of the breakdown and put playmakers such as Kurtley Beale and Berrick Barnes on the front foot.

And while Robshaw was impressed with his side’s attitude in attack, he knows Australia’s application at ruck time created the necessary space for the Wallabies to win the game.

“We want to play an attacking brand of rugby. We want to go out there and move the ball about,” added Robshaw.

“There were a huge amount of positives in our attacking play but we were a little bit light in numbers at rucks and they managed to slow our ball down.

“Their whole team was very attacking and we knew that. Beale has a full repertoire of skills and that creates a lot of space for everyone.

“They manipulated the space well and they were very smart like that. They do that very well and that’s something we have to learn about.”