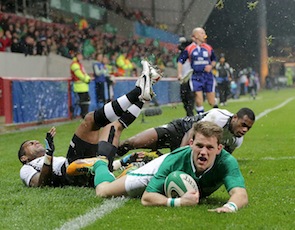 The duo bagged five tries between them as an Ireland XV cruised to a 53-0 victory over Fiji at Thomond Park.

2009 Lion Tommy Bowe and Andrew Trimble have established themselves as Ireland’s regular wings but are now are under pressure.

"There were a lot of young men having their first go and it would be wrong to single any one out," said Kidney. "There was a fair bit of finishing from some of the backs.

“They’ve certainly put their hand up and I guess that will have to be recognised. We’ll take a look at the videos and, whether it affects selection or not, we’ll have to wait and see. We won’t pre-empt anything.

"Overall, the first half went okay. The third quarter definitely died a lot and we will have to take a good look at that because that was the section that cost us against South Africa.

"We finished strongly but the thing that pleased me most was the defence. Even though we were points ahead we defended stoically.”

Gilroy, who has been tipped by some as a dark horse for the Lions, was delighted with his performance.

"Any chance I get to put on the jersey and play for my country is a big step for me," added the 21-year-old.

"It is something that I have worked towards really hard and I'm glad I took my opportunity."