Scotland full back Stuart Hogg is convinced his side are moving in the right direction despite a second successive autumn international defeat at the weekend. [more] 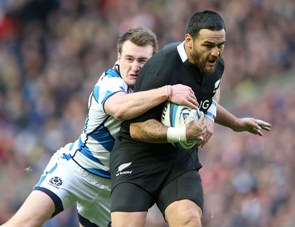 Scotland full back Stuart Hogg is convinced his side are moving in the right direction despite a second successive autumn international defeat at the weekend.

The Scots slipped to a 21-10 loss to South Africa on Saturday having opened their end-of-year campaign with a 51-22 reverse to New Zealand a week earlier.

But despite the failure to build on successful summer tour meaning Scotland can no longer secure a top eight world ranking prior to December’s World Cup seeding deadline, Hogg says there is plenty to suggest a bright future lies ahead.

"We’re not far away at all," Hogg told The Scotsman.

"We’re obviously going in the right direction now, having come from a horrendous Six Nations to a good summer tour.

"I think our game play has improved and we’re in a better structure now – the coaches have us in the right shape. The boys are enjoying playing under them, although, obviously, we get frustrated at times and chase the game a little bit – our structure went completely at times against South Africa which is not good enough.

"We’re just as disappointed after the Springboks as we were after New Zealand. In the first half hour we let them get on top, then they shut up their defence and made us pay. I think it makes it more disappointing that we got on top in the second half because it shows that we could have and probably should have won the game.

"But everything is a work in process and, even after two defeats, the belief is coming day by day, game by game.

"We just need a good day and a good performance to really believe in ourselves and each other, and hopefully that will come this weekend against Tonga."

Things could have been far worse against the Springboks after the visitors surged 18 points clear just five minutes into the second half.

A fine try from replacement scrum-half Henry Pyrgos brought the hosts back to within touching distance after 50 minutes and they pushed hard for another score in the final half hour.

The manner in which they ended the encounter pleased Scotland skipper Kelly Brown, although the flanker admits improvements need to be made against the Tongans at Pittodrie.

"The last 30 minutes it was either a case of lie down and die or stand up and fight, and I thought we stood up and fought," said Brown.

"As a captain I want a side that is going to stand up and fight, but next week we need to do that from the first whistle.

"We needed to be very disciplined. And I felt in the first half we weren't and our energy was a little bit down.

"We need to learn our lessons and next week it's about really getting fired into Tonga."