Wallaby centre Ben Tapuai says their current tour of Europe is giving the squad a taste of what it will be like to face the Lions next summer. [more] 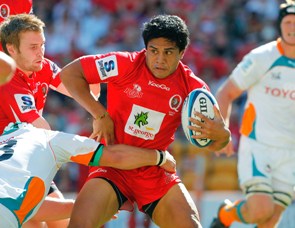 Wallaby centre Ben Tapuai says their current tour of Europe is giving the squad a taste of what it will be like to face the Lions next summer.

The Reds midfielder, who started the defeat to France in the No13 shirt before switching to the No12 jersey for the win over England, reckons the four-match adventure is providing an insight into what the Green and God can expect when Britain and Ireland’s elite head Down Under.

Tapuai knows passionate supporters, hugely physical packs and hard running backs are likely to be on the agenda again in 2013 even if he insists he and his team-mates are trying not to look too far ahead until tests against Italy and Wales are behind them.

“This trip is kind of a taste of what we’re going to get next year,” said Tapuai, who made his Wallaby debut on last season’s end-of-year-tour and now has a handful of caps to his name.

“Everyone’s taking the Lions into account but we probably haven’t really thought that far ahead yet.

“It’s more the small chats between the boys that this is what we can expect: the physicality of the forwards, the lines of the backs, the kicking game etc.

“I was a young lad the last time the Lions came over. My first live game was one of those Tests. I was playing in Sydney at the time but I obviously didn’t think I would go on to play for the Wallabies.

“To look back and then realise that next year you’ve got the opportunity of playing against the Lions is something you’d treasure for the rest of your life.”

Tapuai certainly didn’t do his chances of completing such a remarkable rise any harm at all at Twickenham as he produced one of his best performances in a Wallaby shirt to date.

The 23-year-old shone in both attack and defence in London – with one significant first half break particularly impressive – and he’s almost certain to get the chance to repeat the trick in Florence and Cardiff after first-choice inside centre Pat McCabe was forced home with a neck injury.

And while the affable midfielder is determined not to jump the gun as far as his Wallaby future is concerned, he admits his first taste of Test action last winter has been spurring him on ever since.

“Coming from last year made me even more hungry,” added Tapuai, who has taken his chance this term after injuries to the likes of James O’Connor, Rob Horne, Berrick Barnes and McCabe.

“Even though I only got about five minutes last season, it felt like about five hours and it was a real honour to put on the jersey.

“To put it on again, especially at Twickenham for the first time I’ve played against England, was something special to be involved in. It’s something to keep striving for.

“I’m not taking anything for granted – it’s just all or nothing every game. That’s the beauty of it. If you’re the next bloke in, it’s your chance and you’ve got to prepare for that.

“If you get your chance, you’ve just got to take it. You’re not guaranteed to be in that jersey for long so you’ve got to make the most of it.”