Lions coach Warren Gatland returns to the Wales set up for Saturday's clash with the All Blacks but he insists the past fortnight has been a vital learning experience as far as his role as Lions coach is concerned. [more] 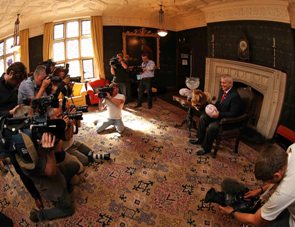 Lions coach Warren Gatland returns to the Wales set up for Saturday’s clash with the All Blacks but he insists the past fortnight has been a vital learning experience as far as his role as Lions coach is concerned.

The man charged with leading Britain and Ireland’s elite to success Down Under next summer spent the opening weekends of autumn international action following the fortunes of Ireland, Scotland, England and Australia as preparations for 2013 begin to gather pace.

Gatland took in Ireland’s Aviva Stadium encounter with the Springboks, Scotland’s Murrayfield match up with the All Blacks and England’s Twickenham showdown with the Wallabies, picking up plenty of pointers on potential tourists and likely opponents along the way.

And while results may not have favoured the Home Nations, the former Wasps, Waikato, Connacht and Ireland boss has been pleased with the information he’s been able to gather in Dublin, Edinburgh and London.

“I’ve just been forming some opinions. At this initial stage it’s about going to games, looking at players and trying to establish where players are at the moment and where teams are, too,” said Gatland.

“The guys that have been around for a bit longer, the established players, you’re going to just check on their form and hopefully their form’s good. Then there’s young players coming through so you want to see if anybody puts their hand up that you might not have expected from the start.

“There’s definitely been positives. There are some individuals who’ve put their hands up. There are a couple of players who haven’t been doing brilliantly for their club sides but have been showing some pretty good form on the international stage so that’s pleasing and encouraging.

“I don’t think there’s been any really outstanding performances from the younger players at the moment but there’s been a couple of younger players in the Scottish performances that really put their hand up, which is good. Obviously, England had a good win in the first game but they were brought back down to earth pretty quickly against Australia.

“There’s a long way to go before final selection and a lot of rugby to be played but there’s a reasonable amount of importance on these autumn games because they’re primarily against southern hemisphere opposition and that’s what will be facing us when we go and represent the Lions. You’ve got to take some account of how teams and players perform against this type of opposition. Although it’s a long way out, it’s important that you see some form from teams and players.”

Gatland certainly saw some form from the Lions’ next opponents last weekend as the Wallabies put their dismal defeat to France behind them in some style.

The New Zealander knows all about an Aussie mentality that refuses to give up the ghost when times get tough and it was that attitude that immediately jumped out at him at Twickenham.

“I went to the Australia England game at the weekend and outside expectation was that England were going to win and win comfortably so that just goes to show the mental resolve that Australia had after the hammering they had against France. They fronted up and really put a performance in,” added Gatland, who is convinced Australia’s recent injury woes will work in their favour in seven months’ time.

“You can never underestimate them and you should never write them off. That’s what they’re good at – when they’ve got their backs to the wall and are under a bit of pressure, they show their resolve and they find a way to get performances.

“The thing with Australia that they’ll look at at the moment is that they know they’ve got a lot of key players who are injured but there’s a huge amount of development going on and players are getting an opportunity that they may not normally have got. That increases the depth of their squad. They’ve got some real quality to come back – with the likes of James Horwill and then particular in the backs – in June and July next year when they do get selected against the Lions.”

Gatland will mirror the Wallabies in turning his attentions back to the Lions once Australia and Wales have completed another 80 minutes in Cardiff on December 1 but paper talk about the tour is likely to have hit new heights by then.

Early team selections and player critiques have been regularly filling the back pages and appearing on TV and radio programmes up and down the Home Nations and Gatland has been taken aback by how much publicity the tour has already generated.

The 49-year-old was fully aware of the stature of the Lions having acted as assistant coach to Sir Ian McGeechan in 2009 and faced the Lions as a player in his native New Zealand in 1993 but even he has been hugely impressed with the interest being shown worldwide in the latest Lions adventure.

“I’m just blown away by the interest already and how much attention has been created. Everyone’s incredibly excited about it. You turn the TV on and they’re talking about a Lions team every week and about players that have put their hands up.

“The interest it’s generating is making it incredibly exciting for me already. It’s not just people here or Australia that are talking about it, either: people in New Zealand are talking about going over and trying to get tickets for one of the Tests just to be a part of the atmosphere that will be created.”

There’s no doubt that atmosphere will continue to build when Gatland announces his coaching team sometime after the Wallabies head for home.

That extension of the Lions pride is next on the agenda and Gatland intends for it to be quickly followed by plenty of discussions regarding the early front runners for the playing positions in Australia.

“There’s the coaching announcement post-autumn, then there’s the chance to sit down with those coaches to look at potentially picking a squad post-autumn, pencilling down names of where we think we’re at at the moment.

“Obviously, there’d be potential for a lot of changes but, in terms of just getting a feel for things, it’s quite good to go through that process.”