Seven years ago Argentina lined up against the British & Irish Lions in a pre-tour Test at the Millennium Stadium. In Dublin this weekend there will be a number of survivors on both sides who will have similar things in mind. [more] 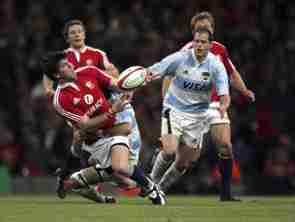 Seven years ago Argentina lined up against the British & Irish Lions in a pre-tour Test at the Millennium Stadium. In Dublin this weekend there will be a number of survivors on both sides who will have similar things in mind.

Saturday’s clash with Ireland at the Aviva Stadium will be the Pumas’ 360th Test match and their first was against a Combined British XV on 12 June, 1910, in Flores. The 1910 tour to South America was the first of three undertaken by a ‘Lions’ style side, although they weren’t fully representative squads.

But while the matches played in Argentina by the sides led by England centre John Raphael in 1910, Scottish back row forward David MacMyn in 1927 and England scrum half Bernard Gadney in 1936 have never been granted international status by the Lions, the game in Cardiff was.

There were eight Irish players in the Lions match-day 22 seven years ago and Donncha O’Callaghan, Ronan O’Gara and Gordon D’Arcy are still around the Irish squad and still in contention for a Lions call next summer.

As for the Pumas, the forwards Eusebio Guinazu, Manuel Carizza and Juan Leguizamon were all on duty in the Welsh capital that day and will be hoping to help their side capture another major scalp in Dublin this weekend.

There were no Irish links to that first international outing for Argentina 102 years ago – the squad comprised 16 England and 3 Scottish players – but there were players in the 1927 and 1936 squads who faced the full might of the Pumas.

Lansdowne flanker Theodore Pike played in the 37-0 win in the first game against the Pumas in '27, while North of Ireland prop Charlie Payne was a try scorer in the 46-0 victory in the second outing. Payne and the Bective Rangers formward Jimmy Farrell played in all four games and helped to secure a clean-sweep for the ‘Lions’ with wins by 34-3 and 43-0 in the final two games. Farrell went on to tour with the Lions in New Zealand and Australia three years later.

In 1936, the tour party to Argentina included Charles Beamish and Vesey Boyle, both of whom played in the 23-0 triumph over the Pumas, with Boyle grabbing two of the four British and Irish tries.

To learn more about the history of the British & Irish Lions, just click here to be taken to the history section of the site.