Stewart McKinney was capable of solving problems for Ulster, Ireland and the British & Irish Lions on the field with his vigorous approach, but now he might just have found the perfect solution to everyone's Christmas nightmare - what to buy for Mum or Dad. [more] 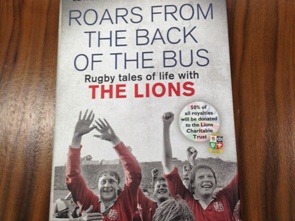 Stewart McKinney was capable of solving problems for Ulster, Ireland and the British & Irish Lions on the field with his vigorous approach, but now he might just have found the perfect solution to everyone’s Christmas nightmare – what to buy for Mum or Dad.

If either are rugby fans then they will certainly enjoy the latest offering from the McKinney pen, ‘Roars From the Back of the Bus – Rugby Tales of Life with the Lions’. Following on from his first book, ‘Stories From the back of the Bus’, his latest tome is dedicated to the Lions.

With 50% of each sale going to the Lions Charitable Trust, everyone who purchases the book will not only be getting a great read, but will also be helping a great cause.

The Dungannon back row man was notorious for his no-nonsense approach to rugby when he was winning his 25 Irish caps and playing for the Lions in South Africa on their all-conquering tour in 1974, and he took the same approach to his latest book.

“Going around Ireland and England doing the research for this book was incredible and the stories I was able to unearth fascinated me. There is a wealth of material out there about the Lions once you scratch the surface,” said McKinney.

“As well as bringing to life some of the great characters of the early Lions tours, I was also able to get many of the great names of the past 50 years to contribute some of their personal stories. Just as with the first book, I’ve enjoyed bringing everything together and I think it makes a great read.

“Learning about how the 1888 players travelled to New Zealand and Australia was a real eye-opener, as was learning the full story about how the first Lions captain, Robert Seddon, drowned midway through that trip.

“I also managed to unearth a diary kept by the old Ulster and Ireland player George Cromey from the 1938 tour. In there he details some of the antics of Blair Mayne. Now there was an incredible man!”

McKinney interviewed the 1950 legends Jack Kyle and Jimmy Nelson and also caught up with 1955 wing Cecil Pedlow. He then uncovered the diary kept by another Irish player, Jim McVickers, from the 1924 tour.

But the stories aren’t all from ‘the good old days’. Another 1974 tourist, John Moloney, has added some of his best rugby memories and his one time Irish half-back partner Micky Quinn had better watch out!

“Many of Stew’s friends contributed to the first edition and we were all keen to be in the second book as well. The surprising thing is that no one has written about Stewart himself,” admitted Moloney.

While McKinney was unable to get a place in the Test side in South Africa, he still holds a very special place in the hearts and minds of his 1974 team mates for one vital contribution to the success of the tour.

Willie John McBride’s side won the first 21 of their 22 matches, including three tests, before drawing with the Springboks in their final outing. But their unbeaten record could have been captured in the game against the Orange Free State in Game 14 had it not been for a penalty goal kicked by McKinney in the 11-9 victory.

There is no mention of that heroic moment in the book, but there are many tales that will bring to life forgotten heroes, provide plenty of laughs about, and insights into, life on tour and give you plenty to talk about over the festive period.

‘Roars From the Back of the Bus – Rugby Tales of Life with the Lions’, edited by Stewart McKinney, is published by Mainstream and is available from all good bookshops priced £17.99.