Wallaby newcomer Nick Cummins says his side's experiences in the win over England will stand them in good stead when the Lions come calling next summer. [more] 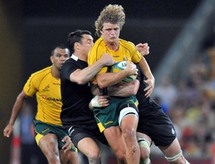 Wallaby newcomer Nick Cummins says his side’s experiences in the win over England will stand them in good stead when the Lions come calling next summer.

Cummins scored the crucial try from his starting spot on the right wing in Saturday’s 20-14 triumph at Twickenham as Australia bounced back from a humiliating defeat to France just seven days earlier.

And with the Wallabies having been roundly written off prior to their trip to London, Cummins believes the manner in which they responded at the headquarters of English Rugby could have even greater consequences come 2013.

“That might be something we can draw off when the time comes,” said Cummins, who admits he’ll be looking to play down the enormity of the three-match series with Britain and Ireland’s elite if he retains his place into June and July.

“The mental mindset that we came into the England game with is something that we can draw off for the Lions series.

“The Lions, how good is that? It’s something to look forward to. It’s a chance for massive development and a chance to test yourself against the best. So it’s exciting, and tough.

“If you let it get too big in your head, it can crush you, especially for a bloke who’s not used to all the pressures of these things! Ignorance is bliss. You’ve got to just get in there, see them as another team and do your individual prep.

“You can’t let the aura of the Lions come in and take over. You have to build your own aura up and take them head on.”

Cummins’ rise to Wallaby status this season has been a remarkable one. Uncapped prior to the final Rugby Championship encounter with Argentina in Rosario in October, the man nicknamed the ‘Honey Badger’ is rapidly bringing his cult status from the Western Force on to the international scene.

The curly-haired, laid back 25-year-old resembles your stereo typical Aussie surfer dude yet his performances in his four Tests to date – and particular in his fine individual showing against the English – are ensuring he is finally beginning to get taken seriously at the top level.

He admits his call up to the squad – which came after injuries to the likes of James O’Connor, Drew Mitchell, Cooper Vuna, Joe Tomane, Adam Ashley-Cooper and Dom Shipperley – was something of a surprise, even if it had been a long-term goal of his, but he’s determined not to let his chance slip now that the No14 shirt is under his stewardship.

And with the Wallaby backline as a whole finally showing more than a few glimpses of their obvious talents after a series of much-maligned displays in Paris, Pretoria and Auckland in particular, Cummins could be in for the long haul.

“There’s been a couple of injuries but that’s how it is every year. There’s been a few more this year but I’ve managed to get myself in the squad. A few opportunities have turned up and you’ve got to take them with both hands," added Cummins.

“We want to have a crack, we want to have a dig. We’ve got a couple of blokes who can beat people one on one and in recent weeks we haven’t been able to use that as much. The wingers didn’t get much of a go against France but we turned that around, got the ball out wide and ended up making a few metres out of it against England.

“We’re creating a bit of space out there so that’s positive going into the next few games. We won’t underestimate Italy and Wales as any team can really put it on, but it’s exciting times for the outside backs.”

Nick Cummins is hugely popular with the Western Force faithful

Exciting times might be on the cards but you can’t imagine that excitement was the over-riding emotion after the 33-6 defeat to the French a fortnight ago.

It certainly appeared that a Wallaby camp previously described as toxic by controversial fly-half Quade Cooper wouldn’t have been the kind of place you’d have wanted to be last week as ex-pros and pundits alike laid into the sub-standard performance in Paris.

But Cummins was quick to put that assertion to bed as he instead suggested that the Stade de France stuffing only added to the squad’s inner strength.

“You might think that heads go down in such situations but when things get tough for this group – and it might be the Australian mentality – you end up finding a bit of something from somewhere to produce what you need.

“I don’t want to talk too soon because there’s a couple of tour games still to go, but the boys really banded together after that. I think we came closer after that performance against France, which wasn’t up to scratch.

“We’re not going to drop our guard, though. It’s Test rugby, these teams (Italy and Wales) are going to watch the tapes and come out ready for us. We’ve got to bring out the aggression and everything we’ve got again and again.”