Ireland produced an outstanding performance to end their autumn campaign with a 46-24 thumping of Argentina. [more] 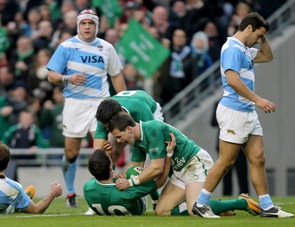 Ireland produced an outstanding performance to end their autumn campaign with a 46-24 thumping of Argentina.

Declan Kidney’s side scored seven tries as they built on the encouraging win over Fiji and secured a spot among the second seeds for next month’s World Cup draw.

Jonathan Sexton claimed a brace of tries to finish with a personal tally of 19 points, while Tommy Bowe also crossed twice in a free-flowing Irish display.

All bar one of the scores came from the backline, with wings Craig Gilroy and Simon Zebo also crossing alongside hooker Richardt Strauss.

Ireland had the game as good as sewn up by half time as they raced into a 24-9 lead at the break and they showed no signs of letting up as they finished the job emphatically at the Aviva Stadium.

Ulster youngster Gilroy marked his first cap with a try just 10 minutes in as Ireland started brightly in Dublin. Gilroy danced through the Pumas defence for a superb score to immediately justify his inclusion ahead of the more experienced Andrew Trimble.

Having added to his hat trick of tries in last week’s non-cap clash with Fiji so soon into his Test bow, Gilroy then turned provider five minutes later as he set up Sexton for Ireland’s second score.

Gilroy’s quick feet provided the space for Gordon D’Arcy to free up Sexton and Ireland were flying with just 15 minutes on the clock.

Nicolas Sanchez ensured Argentina weren’t cut completely adrift as he slotted two penalties either side of Ireland’s early tries but the home side remained the dominant force and were soon celebrating a third score as the game crossed the 20-minute mark. This time it was Strauss who claimed his first try in just his second cap despite a nervous wait for the TMO to confirm that he hadn’t lost the ball over the line.

Sexton’s first miss in three conversion attempts left Ireland leading 19-6 and, although Sanchez reduced the deficit with a third three-pointer, Ireland’s confidence was already far higher than it had been in the second half of their defeat to South Africa at the same venue a fortnight ago.

That confidence grew even greater just past the half hour when Bowe’s solid take of a hanging high ball was followed by a willingness to move the ball wide that allowed Zebo to speed over in the corner.

Ireland showed no signs of letting off after the interval as they began the second period in a similar manner to that of the first. Sanchez’s fourth penalty made it a 12-point ball game five minutes in but any prospect of nerves creeping into the Ireland camp was dismissed almost immediately as Bowe claimed his country’s fifth try.

The 2009 Test Lion capped his 50th Ireland appearance by chasing down Sexton’s chip ahead on 47 minutes and things got even better for the home support when Sexton grabbed a sixth four minutes later.

Things got a little quieter for close to 20 minutes but Bowe finished things off with seven minutes to play after Ireland brought on a raft of replacements.

Argentina hit back with two tries of their own in the last four minutes through Tomas Leonardi and Juan Martin Hernandez Lobbe but it did little to take the gloss off a comfortable Irish win that sees them end 2012 on a real high.