Wales lose but end on a high

Wales ended Saturday's clash with New Zealand on a high but still finished second best to the World Champions. [more] 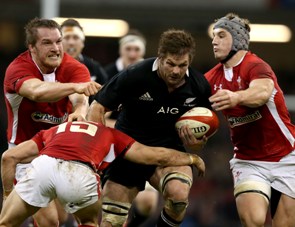 Wales ended Saturday’s clash with New Zealand on a high but still finished second best to the World Champions.

The Grand Slam winners scored the final two tries at the Millennium Stadium but the game was already beyond them by the time Scott Williams and Alex Cuthbert both went over.

New Zealand ran out 33-10 winners in Cardiff to make it 20 games unbeaten after racing into a commanding first-half lead.

A hat trick of penalties from Aaron Cruden had the Kiwis 9-0 ahead despite a strong start from the Welsh, although it could have been different had hooker Andrew Hore been at least yellow carded for his punch on Bradley Davies.

The Wales lock was forced off the field with his head looking far from clear and he was immediately followed by tight-head prop Aaron Jarvis who twisted awkwardly at the same ruck.

Wales also lost Lions centre Jamie Roberts after the second of Cruden’s strikes before the game hit the 20-minute mark but the home side were well in the contest until Liam Messam’s converted 26th-minute try left them with a 16-point deficit.

Tony Woodcock made Warren Gatland’s half-time team talk even more difficult when he powered over with the final play as New Zealand increased their lead to 23 points.

That gap grew even wider when Cruden knocked over a fourth penalty just after the break and Wales looked like being on the wrong end of a cricket score when he converted lock Luke Romano’s try to make it 33-0 with more than half an hour left to play.

But Wales refused to give up the ghost and they finally produced the kind of enterprising, attacking rugby that was missing in much of their defeats to Argentina and Samoa.

The first Welsh try was something special. It was a move that had everyone out of their seats and looking at each other in amazement.

Strange that, given that it was just a driven lineout. What made it extraordinary was the amount of men Wales committed to the setpiece – 13 in total. The Kiwis would have raced away for the easiest of intercepts had Matthew Rees overthrown, but he didn’t and it was a case of one-in, all-in as Williams emerged beneath a pile of bodies for an ingenious score.

Leigh Halfpenny missed the extras but all of a sudden Wales were on a high and the crowd were on their feet with 56 minutes gone.

Wales gave as good as they got in the closing quarter and were rewarded for their enthusiasm when Cuthbert finished a well-worked overlap with three minutes to go.

And while the scoreline may show a comfortable victory for the All Backs and a fifth straight defeat for Wales, the way in which the contest ended will at least have given Gatland and co hope ahead of next Saturday’s clash with the Wallabies.