Robbie Deans believes his Wallabies deserve more credit for digging deep to win matches after holding on for a 22-19 win over Italy in Florence. [more] 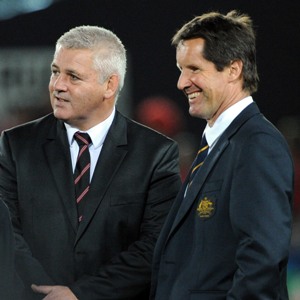 Robbie Deans believes his Wallabies deserve more credit for digging deep to win matches after holding on for a 22-19 win over Italy in Florence.

It was his side’s seventh Test win by seven points or less this year and Deans will be glad when the game against Wales on Saturday brings down the curtain on a year of 15 Test matches.

The game at the Millennium Stadium will not only be the wallabies’ last of the year, but it will also be their final outing before facing the 2013 British & Irish Lions next June. And just to add a little bit of extra spice to the occasion, the game will feature a battle of wits between the Lions head coach Warren Gatland and Deans.

The Wallabies have beaten Wales five times in the past 13 months, but the home side will need to avoid a sixth defeat if they are to remain in the second tier of the IRB Rankings ahead of next week’s RWC 2015 Pool draw.

It means there can be no let up by the Australians as they round off their year of rugby. David Pocock could be fit to return to action, but scrum half Brett Sheahan limped off with an injury in Florence and could need replacing.

"You never have it your own way, totally, in Test rugby – that's part of the ebb and flow of the game. But they found a way through, so give them credit for that, and they've been doing it quite often,” said Deans in praise of his team after they let slip a 22-3 lead.

“That's something that historically, we have been criticised for. Well, we are doing it routinely now, in these tight ones. It was a win, and they were under a lot of pressure, but they found a way through.

"The first half was good, but we were half-a-metre to a metre off in the second half, so we will allow the blokes to re-charge as best as possible. We won't want to drain all the energy prior to playing this week.