England and Wales both have injury issues ahead of their final autumn internationals. [more] 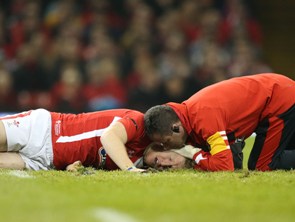 England and Wales both have injury issues ahead of their final autumn internationals.

The sides face New Zealand and Australia respectively this Saturday as they look to bounce back from previous defeats.

England have lost to both the Wallabies and Springboks so far this month, while Wales have been beaten by Argentina, Samoa and the All Blacks.

And both sides’ chances of ending the year on a high have been dealt serious blows as a number of key men won’t feature in London or Cardiff.

England’s first-choice fly-half Toby Flood has been ruled out with a toe injury, while team-mate Alex Corbisierio is a doubt with a knee problem and 2009 Test Lion Ugo Monye has damaged his calf.

Flood is expected to be replaced in the starting line up by Owen Farrell, with Gloucester’s uncapped playmaker Freddie Burns now likely to be on the bench against the World Champions.

Burn’s club colleague Nick Wood is acting as temporary cover for Corbiserio and fellow prop Joe Marler, who missed the Australia game with knee ligament damage, while Bath wing Tom Biggs comes in for Monye, who didn’t feature in either of the last two Tests despite scoring against Fiji in week one.

“Toby Flood's toe has been re-examined and there is no bone broken but we will need to see how it settles down,” said England boss Stuart Lancaster who has now seen the Leicester No10 ruled out of the clash with the All Blacks.

“Freddie has been in for two of the last three weeks (as injury cover for Jordan Turner-Hall) so we know what he can bring and Nick Wood will provide cover as we manage Alex's knee at the start of the week.”

As for Wales, their fresh injury list is even more extensive.

Wales and Lions coach Warren Gatland has delayed naming his side to face Australia at the Millennium Stadium by 48 hours  until 1pm on Thursday while he waits for further diagnosis on a number of frontline players.

Blues lock Bradley Davies is recovering from severe concussion after being hit by All Black hooker Andrew Hore and hasn’t trained today, although a statement from the Welsh Rugby Union insisted it ‘is still too soon to reach any further conclusions’ on whether he will feature on Saturday.

Ospreys tighthead Aaron Jarvis is definitely unavailable having suffered knee ligament at the weekend, while Lions centre Jamie Roberts won’t train for the early part of the week due to the hip injury that saw him depart after 19 minutes of the 33-10 defeat.

Former national skipper Ryan Jones has had stitches in a head wound meaning his role in training will be limited until the latter stages of the week; Dan Biggar’s shoulder problem has not yet healed sufficiently for the fly-half to take part in contact sessions; Ian Evans is currently undergoing a fitness test on his knee; and George North is continuing his rehab on the hip problem that prevented him from playing last time out.

Blues lock Lou Reed has been made a full squad member after ‘training with’ the team last week. Paul James (Bath) and James Hook (Perpignan) have returned to their respective clubs, but Wales have at lest been boosted by the news that Luke Charteris (Perpignan), Gethin Jenkins (Toulon) and Mike Phillips (Bayonne) have all remained in camp despite the Wallaby Test being outside the IRB window.