Ireland coach Declan Kidney will be pressing to get his squad together as often as possible in the run up to next year's Six Nations. [more] 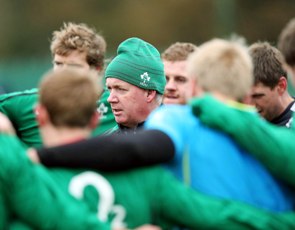 Ireland coach Declan Kidney will be pressing to get his squad together as often as possible in the run up to next year’s Six Nations.

Ireland ended their autumn campaign on an almighty high as they put 46 points on Argentina at the weekend.

Kidney saw his troops run in seven tries at the Aviva Stadium as they built on the 53-0 non-cap win over Fiji and bounced back from the opening defeat to South Africa in some style.

Plenty of praise has been heaped on the new breed of Irish stars in the two days that have followed, while Kidney’s own position suddenly seems a lot safer after suggestions that he might be removed from his post sometime in 2013.

Now the task is to build on that fine performance when they face Wales in Cardiff in the Six Nations opener next spring and Kidney knows the best chance of doing just that is to see his young squad on a regular basis over the next two months.

“My task is to make sure we have as strong a squad as possible. We’ll assemble again at Christmas and I’ll try and get whatever time we can together,” said Kidney.

“It’s a good feeling going into Christmas and we will probably go from being no-hopers to having a chance.

“But once you play Wales in Wales, we will need to get out of the blocks faster than we’ve done for the last couple of years and it’s only prep time that will enable that.

“It’s a new squad. When you’re in school, you’re used to having different squads all the time, year on year out, but to have so many changes…

“Of the 32 we had in training this week, we had 17 new guys compared to the World Cup. That’s a monumental turnover.

“The bench had three one-cappers. I think four of the pack together had 21 caps between four of them. I think that’s why there’ll be a lot of talk about Craig (Gilroy) and Chris Henry, you could pick him out as well. Peter (O’Mahony) has started to come good and it takes a few fellas to do that.”