A surprising number of Scots could now be heading to Cardiff this weekend after Brendan McKibbin was added to the Wallaby squad. [more] 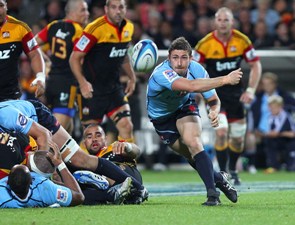 A surprising number of Scots could now be heading to Cardiff this weekend after Brendan McKibbin was added to the Wallaby squad.

Irvine-born McKibbin has been called up for Saturday’s clash with Wales after Brett Sheehan suffered an ankle injury in the win over Italy at the weekend.

The 27-year-old, who spent his early years in Kilmarnock before moving to Brisbane at the age of three, still has family connections north of the border and he is convinced there may be a few late calls to the Millennium Stadium ticket office this week.

“All my extended family is still in Scotland still so I’m sure that when news breaks there they might all be hopping the in car and going the 500kms down to Cardiff!” said McKibbin.

“I woke up to a text message from the Wallabies’ manager this morning. I was still waking up at 6am but it was pretty exciting. My girlfriend Edwina was over the moon. I rang my parents too, they’re in Queensland so I got them out of bed and gave them some good news to start their week.”

McKibbin will join up with his team-mates tomorrow as the Wallabies get set for their final scheduled Test match before the Lions come calling in 2013.

And he seems certain to be thrown in at the deep end by being handed a spot on the bench for the Millennium Stadium encounter as Nick Phipps is the only other fit scrum-half in the squad.

“It’s a bit of a shock to the system that I’ll be preparing for a game in a week when I was expecting to be preparing to run up the Coogee stairs and what not,” added McKibbin, who is currently in pre-season training with his Super Rugby side.

“That’s a bit of a change in mental application but it’s pretty full on at the Waratahs at the moment so I feel ready. Michael Cheika has been asking some pretty tough questions of us as a squad, and we’ve been doing a fair bit of work mentally and physically. I’ll reflect on that on the flight over there and read up and rest up on the long international flight.

“I’ve spoken to Robbie (Deans) a few times in the past year and I’ve been through the plays, policies and structure so I’m familiar with things, as much as I can be from the outside anyway.

“If given the opportunity I’m sure I’ll take it with both hands.”

McKibbin’s opportunity is a big blow for Sheehan who endured a six-year wait from his Test debut to his first start at the weekend.

Sheehan, who began the third tour match in Florence after being on the bench for the opening two Tests in Paris and London, limped out of the 22-19 win after just half an hour and has since been ruled out of the last match of the year.

"A post-game X-ray later cleared Sheehan of any broken bones and he has travelled to Wales with the squad ahead of the James Bevan Trophy Test, but will be unable to play a part in the match," read a Wallabies statement.

"Sheehan will undergo scans in the coming days in Cardiff to determine both the extent of his injury and the course of rehabilitation required."

While Sheehan definitely won’t feature against the Welsh, Kane Douglas could be back in contention after a two-game absence.

The Waratahs lock sat out the matches against England and Italy after picking up a knee injury in the defeat to France.

Douglas decided not to travel to Florence in order to stay with his ill mother in London but he has now rejoined the Wallabies for their sixth Test against Wales in just 13 months.