Lions coach Warren Gatland is still optimistic about the side's chances Down Under despite an underwhelming autumn series for many of the Home Nations. [more] 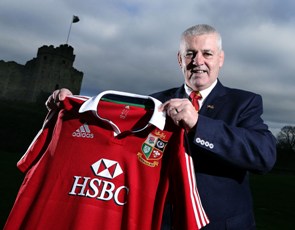 Lions coach Warren Gatland is still optimistic about the side’s chances Down Under despite an underwhelming autumn series for many of the Home Nations.

Ireland’s 46-point thumping of Argentina last Saturday has been the standout result so far but none of the four Lions countries have yet beaten one of the southern hemisphere’s big three.

But, while Gatland admits results and performances could have been better, he remains in positive mood thanks to the amount of talent in the British and Irish ranks ahead of the 10-match tour of Hong Kong and Australia.

“A lot of us are disappointed with the autumn but it’s a reminder that the southern hemisphere teams have come out of a pretty tough tournament and they’ve been together a long time. It’s also a reminder of the intensity they play at week in, week out. It just takes us a little bit of time to cope with that,” said Gatland, at a launch for the new adidas Lions shirt which goes on sale on Saturday.

“That is a struggle that will be the challenge with the Lions: the first time the team is going to be together is getting on the plane.

“Those first three or four weeks together are going to be key in not getting too hung up on results in those warm up games leading into the first Test. It’s going to be about looking at combinations, giving everyone the guarantee they will get a start in those first three games and trying to make the players feel like they have put themselves in the shop window.

“What I am still excited about is the potential that a Lions team has, particularly in certain areas where I think we have real strength.

“There are a few injuries but potentially we have a very strong second row; there’s a lot of competition in the back row and in midfield, and in the back three there are some real options, players playing with some form.

“We’re still lacking strength in depth in one or two areas if we did pick up injuries, but there is some real strength in a Lions squad.”

Ireland certainly showed plenty of that strength in their demolition of the Pumas and it’s perhaps unsurprising that Declan Kidney’s men are the side that have impressed Gatland most this month.

The man charged with leading the Lions to success against the Wallabies watched the team he used to coach face the Springboks in their opening end-of-year Test and he is full of praise for the way they have kicked on in the two games that followed.

“I thought they were really good in the first half against South Africa. They were disappointing in the second half but then they’ve kicked on and improved.

“The pleasing thing about Ireland last week was that they went out and played rugby. They got the ball into Craig Gilroy’s hands, which was great, and then you saw the experience of someone like Tommy Bowe as well – he was outstanding.

“It was the first time really that they’d coped without some of the guys who’ve been around there for a long time, the O’Driscolls and the O’Connells. They’ve been the icons of the team and they’ve seemed to struggle when their presence hasn’t been there. But they looked comfortable without that experience, which was pleasing.”

Gatland returned to the Wales set up ahead of last weeks’ clash with the All Blacks and his next task is to beat the Lions’ summer opponents in Cardiff this Saturday.

Wales may have failed to pick up a win in their first three autumn internationals but Gatland saw some real signs of improvement in the second-half of the game against his native New Zealand and he is confident the Wallabies will be given a real run for their money before they head for home.

“We were disappointed with the first half but I said to the Welsh boys that we had 73 per cent possession and 57 per cent territory in the second half.

“They never use the excuse they have fallen off, the game has been won. They are usually the most ruthless team out there. Our players just felt it took a while to cope with that pace, intensity and physicality. From a coaching perspective, those things can be rectified.

“I have looked at that and thought there are some things we need to address but, collectively for the four Home Nations, there are a lot of positives we can take out – and look at – from the autumn series.”

News
Previous story Wallabies lose another lock
Next story Will Sharpe sign off in style?