Lions skipper Paul O'Connell is no nearer knowing when he will finally return to action. [more] 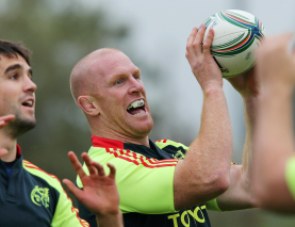 Lions skipper Paul O’Connell is no nearer knowing when he will finally return to action.

The man who led the Lions in South Africa three years ago is currently out of action with a back injury.

O’Connell has featured just twice this season for Munster – in the Heineken Cup clashes with Racing Metro and Edinburgh – and head coach Rob Penney is still unsure when the giant lock will be available for selection again.

The Munster faithful will be desperate to have their talismanic skipper back in contention for the European double header with Saracens early next month but Penney has suggested that such a target may be unrealistic.

“Paul will be ready when he is ready. It is that same line coming out,” said Penney.

“He is making slow progress. We haven’t even thought about Saracens yet, but miracles can happen.

“It is an unpredictable injury…it could just linger on or be a nuisance too. It is frustrating for everybody.”

O’Connell missed all three of Ireland’s autumn fixtures against South Africa, Fiji and Argentina with the reoccurring back problem.

The 33-year-old alsosat out the summer tour of New Zealand, with a knee injury he picked up in the PRO12 win over Ulster back in May the reason for his unavailability in June.

The double setback means O’Connell has played next to no rugby in the past six months as he looks to earn selection for a third successive Lions tour next summer.

But while O’Connell has had to watch from the stands in frustration, a number of his fellow Munstermen have returned to the squad on a real high after impressing in Ireland’s thumping win over Argentina last week.

Penney pointed to the performances of a whole host of his charges as a reason to be cheerful and he admitted that he and his fellow coaches will consider echoing their national counterparts in playing Simon Zebo at full back and Keith Earls at outside centre.

“I think it was exciting Donnacha Ryan had such a dominant performance in that last Test,” added Penney in the Irish Times.

“I thought Peter O’Mahony really came on and had a big influence on the tough, robust aspects of that game. And out the back we were really happy with Conor Murray and Keith Earls playing so well.

“When a guy like Simon (Zebo) gets an opportunity and comes through as well as he has it is wonderful for everyone involved. He has created another positional option for us. Every time they get put against world class opposition like that it is an opportunity.

“It is up to us (where Munster play Zebo and Earls) but we are endeavouring to help Irish rugby achieve what it needs to.

“We talk a lot and we’ll endeavour to meet their needs where we can, but we also need to be conscious of the needs of our team. Hopefully can meet everyone’s needs.”

News
Previous story Wallabies lose another lock
Next story Will Sharpe sign off in style?