Australia will be forced into a change to their forward pack this Saturday after they lost yet another second row. [more] 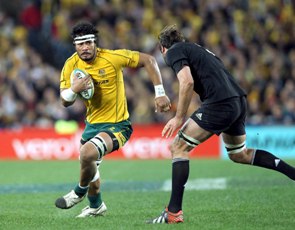 Australia will be forced into a change to their forward pack this Saturday after they lost yet another second row.

Sitaleki Timani has been suspended for a week following his involvement in a 13th-minute fracas during the win over Italy at the weekend.

Timani pleaded guilty to striking an opponent in Florence and escaped the possibility of a more substantial ban, although a lengthy suspension would have had no greater effect on the Wallabies who have just the one scheduled Test match remaining before the Lions come calling in 2013.

The Tongan-born lock will therefore miss the final tour clash with Wales in Cardiff as the Wallabies look to end 2012 on a high.

"Acknowledging the player's admission of having carried out the act of foul play, the Judicial Officer deemed the incident to be at the low end of the IRB's table of offending and suspended the player for one week, having taken into account the mitigating factors," read an IRB statement.

Simmons has now had his ban reduced to five weeks, meaning he will be free to start the Super 15 season without a suspension hanging over his head, but it still rules him out of Saturday’s Test.

Deans will now be hoping Kane Douglas is passed to fit to play having missed the games against England and Italy.

Douglas is struggling with a knee injury but he rejoined the squad earlier this week having not travelled to Florence in order to stay at his mother’s bedside in a London hospital after she suffered a stroke on the way over from Australia.

Cadeyrn Neville of the Melbourne Rebels, who was called up after Simmons’ suspension, is the other lock in contention for a spot alongside skipper Nathan Sharpe.