IRB World Player of the Year nominee Owen Farrell will start at fly-half for England this weekend. [more] 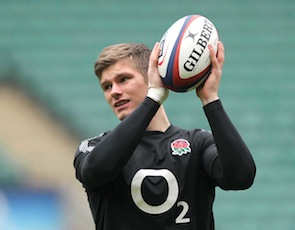 IRB World Player of the Year nominee Owen Farrell will start at fly-half for England this weekend.

With Toby Flood sidelined with a toe injury Farrell, one of four nominees for the award, comes in as the only change to face New Zealand.

Freddie Burns comes onto the bench and could win his England debut if called upon and Courtney Lawes also makes a welcome return to the match-day squad.

"We are delighted that Courtney has got an opportunity. He has worked hard to get back in contention and what better game for him to make an impact," said England head coach Stuart Lancaster.

"The same with Freddie Burns, who has had a great Premiership season so far, and we are looking forward to seeing him contribute should he get his chance."

England go into their All Blacks clash on the back of two defeats. England crashed to a disappointing 20-14 loss to Australia but took South Africa to the wire before eventually succumbing 16-15.

And Lancaster has urged his side to produce another fiercely committed performance.

"We asked for a big response from the players after Australia and we got one last Saturday against South Africa, although ultimately we were denied," said Lancaster.

"That frustration has been channelled this week and the whole squad has reacted with a determination to get a victory against the top team in the world."

The All Blacks remain unbeaten in more than a year and have not lost in their last five visits to Twickenham.

But their preparations have been hit by a sickness bug, which has affected all but two of the All Blacks’ squad.

Head coach Steve Hanson insists New Zealand can cope with the bug and has recalled Dan Carter after the mercurial fly-half shook off an Achilles injury.

Elsewhere Kebon Mealamu replaces the suspended Andrew Hore and Brodie Retallick has been given the nod ahead of Luke Romano.