IRB Player of the Year nominees

England's Owen Farrell is a shock inclusion on the International Rugby Board's Player of the Year shortlist. [more] 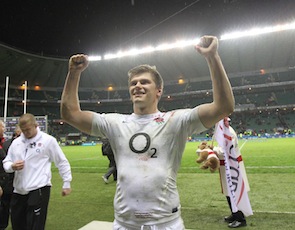 England’s Owen Farrell is a shock inclusion on the International Rugby Board’s Player of the Year shortlist.

The 21-year-old fly-half is the only home nations player nominated alongside Richie McCaw, Dan Carter and Frederic Michalak.

The winner will be announced at the Rugby World Cup 2015 draw in London next month.

“It has been a compelling year of international Rugby with the introduction of the expanded Tours and Tests calendar, Argentina’s successful inauguration into The Rugby Championship and the race for rankings points to secure a favourable RWC 2015 Pool draw,” said IRB Chairman Bernard Lapasset.

“As ever, the competition has been fierce and the panel had a tough time deliberating the shortlist from a number of stand-out candidates. All four players on the shortlist thoroughly deserve their place after standout performances during the year and consistency in the tough environment that is Test Rugby.”

Lions contenders Dan Lydiate, Jonny Sexton, Ross Rennie and Chris Robshaw were all touted as contenders but miss out.

The nominees were selected by the IRB Awards independent panel of judges, which is chaired by Australia’s RWC 1999 winning captain John Eales.

The panel comprises some of the biggest names in the game in Will Greenwood, Gavin Hastings, Raphaël Ibanez, Francois Pienaar, Agustín Pichot, Scott Quinnell, Tana Umaga and Paul Wallace.

“This has been one of the closest years to date. In fact the result could be influenced significantly by this weekend’s matches, making it a highly contested prize,” said Eales.