The Wallabies will have extra motivation to end 2012 with a win this Saturday as their clash with Wales is set to mark skipper Nathan Sharpe's last appearance in the Green and Gold. [more] 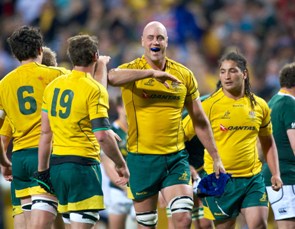 The Wallabies will have extra motivation to end 2012 with a win this Saturday as their clash with Wales is set to mark skipper Nathan Sharpe’s last appearance in the Green and Gold.

If the prospect of finishing their autumn tour with a third victory and a sixth success over the Welsh in just 13 months isn’t enough to ensure a top-draw performance in Cardiff, then the imminent retirement of one of their most respected men should do the trick.

Sharpe’s position within the Wallaby camp is an exalted one regardless of the captain’s armband and you will be hard pushed to find anyone in Australia who will question his commitment to the cause across a decade of service.

The 34-year-old won his first Test cap against France back in 2002 and is by far the longest serving member of the current Wallaby squad, as well as being one of just two remaining Aussie players to have faced the Lions, having lined up against Martin Johnson and Danny Grewcock for the Queensland Reds in 2001.

He sits second behind George Gregan in the list of most capped Australians having surpassed David Campese, Stephen Larkham and George Smith shortly after reaching 100 Test caps when he started the Bronze Medal Match against Saturday’s opponents in Auckland at last year’s global gathering. Sharpe will end his international career with 116 appearances to his name, three World Cups, a whole host of Tri Nations and a Rugby Championship campaign in the bank, but his impact on the national side doesn’t just stem from past achievements.

Sharpe has been the benchmark for consistency across a turbulent year for Australian rugby, leading from the front, never taking a backward step and constantly setting an example on and off the field. Having shone as his country’s stand-in captain in the latter part of this season, Sharpe picked up the John Eales Medal as his country’s top performer across the year for the second time last month. In short, the man is in form. He isn’t being forced out or slipping away quietly. Instead, Sharpe is signing off in style.

"He is an integral part of the side and there's added incentive and motivation to send him out a winner – something we think he deserves," said Wallaby wing Drew Mitchell.

"The type of bloke he is, I don't think he'd like too much chat about it in a group sense, and I don't think you'll be hearing anyone in team huddles with a "let's do it for Sharpey" kind of thing, but I think there's an understanding and perhaps a couple of conversations in the group.

"Obviously there is bigger motivation in that we are playing for our country… but a guy like Sharpey, who has done so much, of course we would like to send him out a winner and perhaps even get a couple of the bigger blokes to throw him on the shoulders after the game or something.

"If we go about our week properly and do the right things in preparation, and we go out and execute as well as we'd like, then hopefully Sharpey gets to finish his career on the note he deserves."

Mitchell says ‘finish’ but the truth is that you never know with Sharpe whether this really is it. The end was initially supposed to have come at the close of the last Super Rugby season, at the same time as he called it quits with the Western Force. Retirement was then due to arrive after the inaugural Rugby Championship campaign in early October but again that date came and went, as did the third Bledisloe Cup clash with the All Blacks. Now Saturday is the fourth predicted finale yet you wouldn’t bet against another future U-turn and the continuing of his considerable career at the very highest level.

Sharpe may have effectively closed the door on the prospect of playing against the Lions once more next summer but it wouldn’t be a major surprise if that door suddenly swung open at the request of Wallaby boss Robbie Deans. Sharpe has always put the needs of the team above his own individual goals and it was that ethos that prompted the postponement of his retirement on the previous occasions.

With second row contenders falling like flies with various ailments, Deans asked Sharpe to stay on and the 6 foot 6 and a half inch forward agreed to do just that. It wasn’t what he’d planned – he should really have been putting his feet up celebrating the end of a stellar career – but it was what the Wallabies needed.

And who’s to say Sharpe wouldn’t answer another SOS call should a similar situation arise next summer?

"We're trying to encourage him to stay,” said Wallaby centre Adam Ashley-Cooper, the man who will take over the mantle as his country’s most experienced campaigner once Sharpe steps down.

"He's a freak and he's getting better and we really want to win this game for him.

"'Do it for him.' That's all we'll need to say amongst the other players.

"This game is about the jersey and Sharpey. We don't have to talk about it all week. We'll just say those simple words and that's all we need to remind everyone. "