Former Lions and Scotland star Gregor Townsend isn't putting himself forward as the next coach of his country. [more] 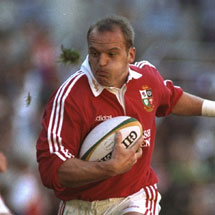 Former Lions and Scotland star Gregor Townsend isn’t putting himself forward as the next coach of his country.

The man who played a key role in the Lions’ last series victory back in 1997 has been tipped as a possible replacement for Andy Robinson who stood down at the weekend.

Robinson resigned after Scotland slipped to a surprising defeat to Tonga at Pittodrie on Saturday and Townsend’s name has regularly popped up alongside Scott Johnson, Sean Lineen and Nick Mallett in the days that have followed.

But the ex fly-half, who stepped down from his role as Scotland assistant coach to take over at Glasgow Warriors this season, insists he isn’t looking for a move back to Murrayfiled.

“I know I have a lot of work to do to improve as a coach.

“I'm enjoying this opportunity and I'll give it as much as I can to make the team successful.”

Townsend believes Robinson put his all into the Scotland post and that the platform is in place for the side to kick in coming seasons.

The 39-year-old was impressed with Robinson’s methods during their time working together and he reckons the work ethic and desire of the current squad will ensure his replacement stands a good chance of success.

“I spoke to Andy on Sunday and he is comfortable with his decision and keen to get back into coaching,” added Townsend.

“I worked with him for three years and learned so much from him. He's a fantastic coach and I know he put everything into the job with Scotland.

“It's disappointing that we were not able to kick on from the summer tour, but we are not far away.

“We have some very good rugby players, but we have not been able to produce an 80-minute performance this autumn.

“We've been close to getting it right for a while. I was involved at the World Cup and we had two defeats in the last two or three minutes of games, against Argentina and England.

“We've been competitive, but we've not had the run of results the team is capable of. Whoever takes over will inherit a hard-working bunch of players that are desperate for success.”