England produced one of their most memorable performances in recent years to shock the All Blacks at Twickenham. [more] 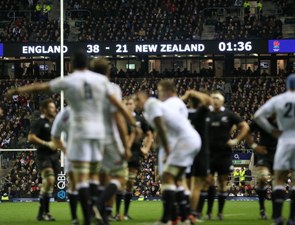 England produced one of their most memorable performances in recent years to shock the All Blacks at Twickenham.

Stuart Lancaster admitted the result was ‘way beyond what we had hoped for’ as his men ended New Zealand’s 20-match unbeaten run with a stunning 38-21 success in their final autumn international.

Three tries in a 10-minute second-half spell sealed a superb victory as England bounced back from previous defeats to Australia and South Africa in the best possible manner.

England led 15-0 just after half time thanks to four penalties and a drop goal from fly-half Owen Farrell but the All Blacks threatened to spoil the party as quick-fire converted tries from Julian Savea and Kieran Read reduced the deficit to just a single point.

England refused to be denied a first win over the world champions since 2002, though, as Brad Barritt, Chris Ashton and Manu Tuilagi all crossed between the 52nd and 61st minutes to push the hosts 32-14 ahead.

A brace of penalties from debutant Freddie Burns sealed the victory by the 71st minute, with Conrad Smith’s late score a mere consolation for the globe’s number one ranked side.

"To put a scoreline like that on a side as good as New Zealand is way beyond what we hoped for," Lancaster told Sky Sports.

"We were disappointed of course with the last two defeats but you just got the sense in the last week that we were building towards something special. I'm so pleased for the boys that they got it.

"There was a lot of composure at half-time, real clarity of thought – we weren't getting carried away. I think that's where we've grown in the last few weeks, that clarity of thought in the heat of battle has really improved. We've always had the energy and the attitude and the character but today we put the top six inches on.

"I'm chuffed for the boys. We've all copped it in the last few weeks but they are the ones who have put the graft in.

"We've always had the intent – we always want to play in the right areas. The way we mixed up our game, our driving game, our scrum, our defence was outstanding…we really, really stepped up."